Lucien Favre is the successor of Peter Stöger and thereby Dortmund’s hope for sustainability on the management post.

Taking over BVB after a disastrous season with the firing of Peter Bosz before the winter break and the following period with Stöger as a short-term solution might be a risk and a chance at once.

By taking a closer look at the Swiss coach, the squad and possible concepts I will assess if Lucien Favre and Borussia Dortmund will be a fitting match.

The philosophy of Lucien Favre

Favre is one of the coaches one can describe as being offensive-minded. The playing style of his former squads at Nice, Gladbach and Hertha BSC prove this. Nice,  for example, had a possession rate of 56.3% on average and a pass completion rate of 87.5% in the last season which is the second best rate in Ligue 1 (stats from whoscored.com).

His main goal is to dominate the opponent with possession and to find the right moment to penetrate defensive lines. 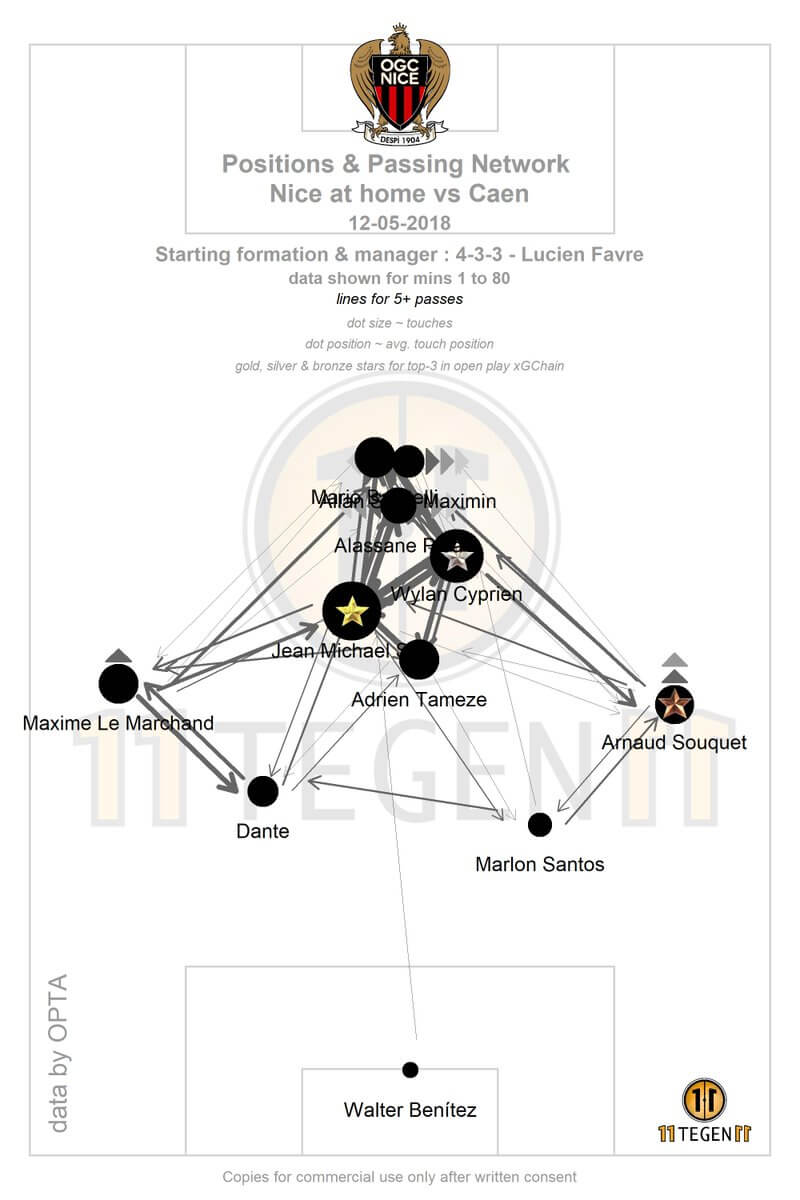 Being the head coach of Nice, Favre prefered to attack through central areas of the pitch. The foregoing passing network created by 11tegen11 proves that most of the attacking players at Nice occupy positions in the centre of the pitch.

Playing out from the back

First pre-season games already revealed that Favre will continue his approach to play out from the back in Dortmund.

To begin with, the goalkeeper plays a vital role when playing out from the back. Marwin Hitz, signed from FC Augsburg, and Roman Bürki will be the two competitors on this position. Both of them might be challenged by Favre’s approach and their role as the first build-up player. However, Bürki might have a slight advantage in terms of his short passing abilities.

Carrying on, the Swiss manager prefers to build up with a line of three. Therefore, one central-midfielder drops between the centre-backs.

For the central-midfield, Favre has countless options. Weigl, Sahin, Dahoud, Rode as well as new signing Delaney are possible candidates for the pivot position. Even the more offensive Mario Götze played on a double pivot in the pre-season match against Austria Wien.

The full-backs task is to provide width and to move between the opponent’s winger and full-back. Thereby space for either centre-back or winger can be created as the opponent has to answer the positioning with an upmoving full-back or a dropping winger. Raphael Guerreiro or former captain Marcel Schmelzer will most likely fulfil this role on the left side. In the persons of Piszczek and Toljan, there are two options for the right-back position, too.

As every team has his own strengths, coaches need to adjust their style to the players’ abilities. Dortmund has got central midfielders who suit to the attacking style of Favre using short passing play. In front, BVB misses a physical striker like Balotelli at Nice though. That is why Borussia might focus on breaking through on the wings. With shooting star Christian Pulisic, Marco Reus, Marius Wolf and Jadon Sancho, there is a lot of dribbling quality on the flanks.

First pre-season matches showed that occupying defenders in the half spaces to isolate a winger on the weak side can become an element of Dortmund’s attacking phase.

Another possible concept is to make use of very agile strikers like Maximilian Philipp and Alexander Isak. With their movement, defenders could be drawn out of the last line and wingers could use the space in behind with deep runs.

Creative players as Mario Götze and Dahoud have the ability to play the final pass. Furthermore, they have the quality to switch play diagonally in the right moment to the isolated wingers. 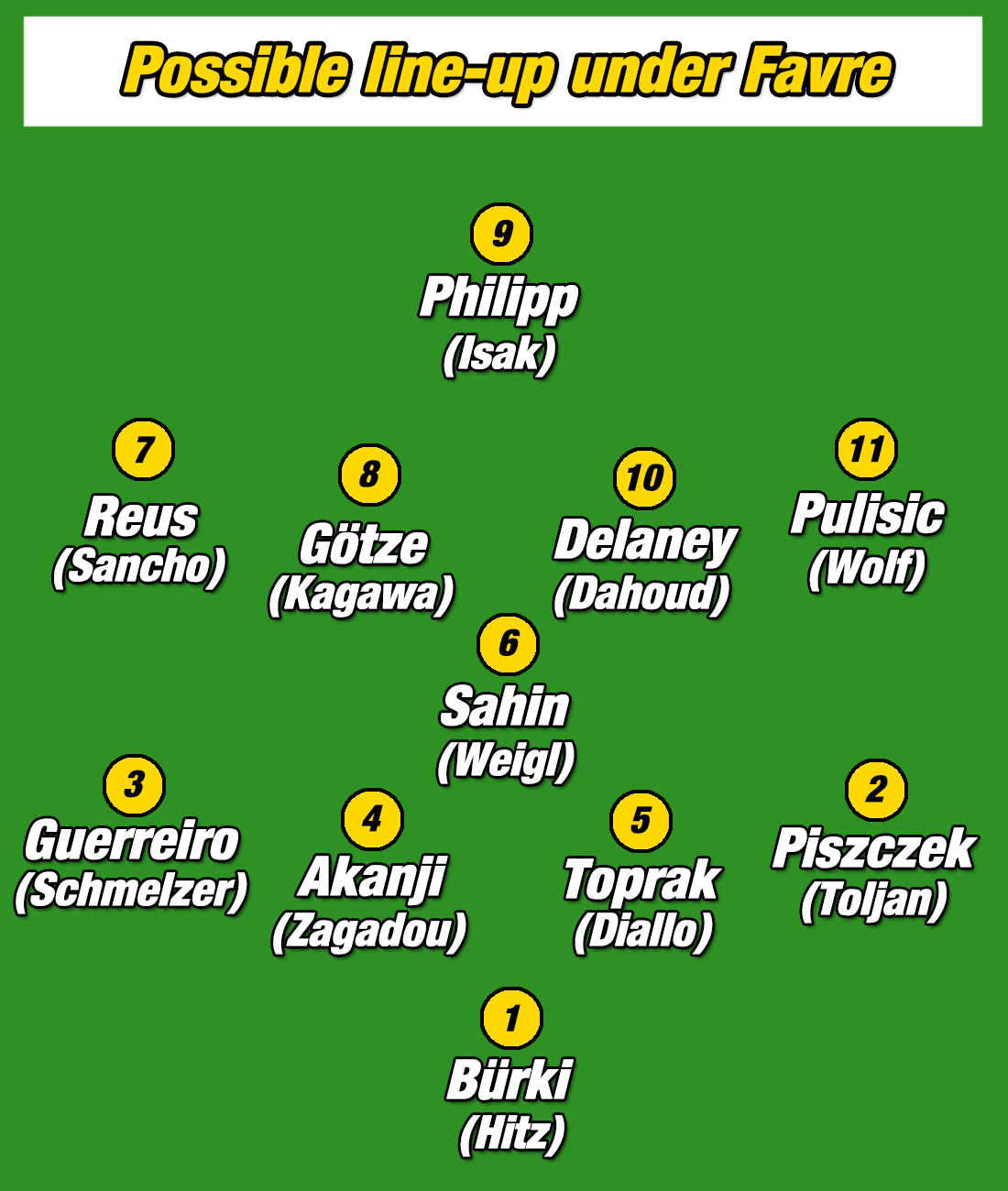 Favre is a head coach who prefers organization and control.

Minimizing space for the opponent’s attacking phase should be the key to give Dortmund control in the phase out of possession. So far, BVB used a mid-block in defence in the pre-season matches. That means that the midfield sets up at the height of the halfway line and the strikers at the centre circle. The back line moves up close to the midfield to reduce space between the lines. 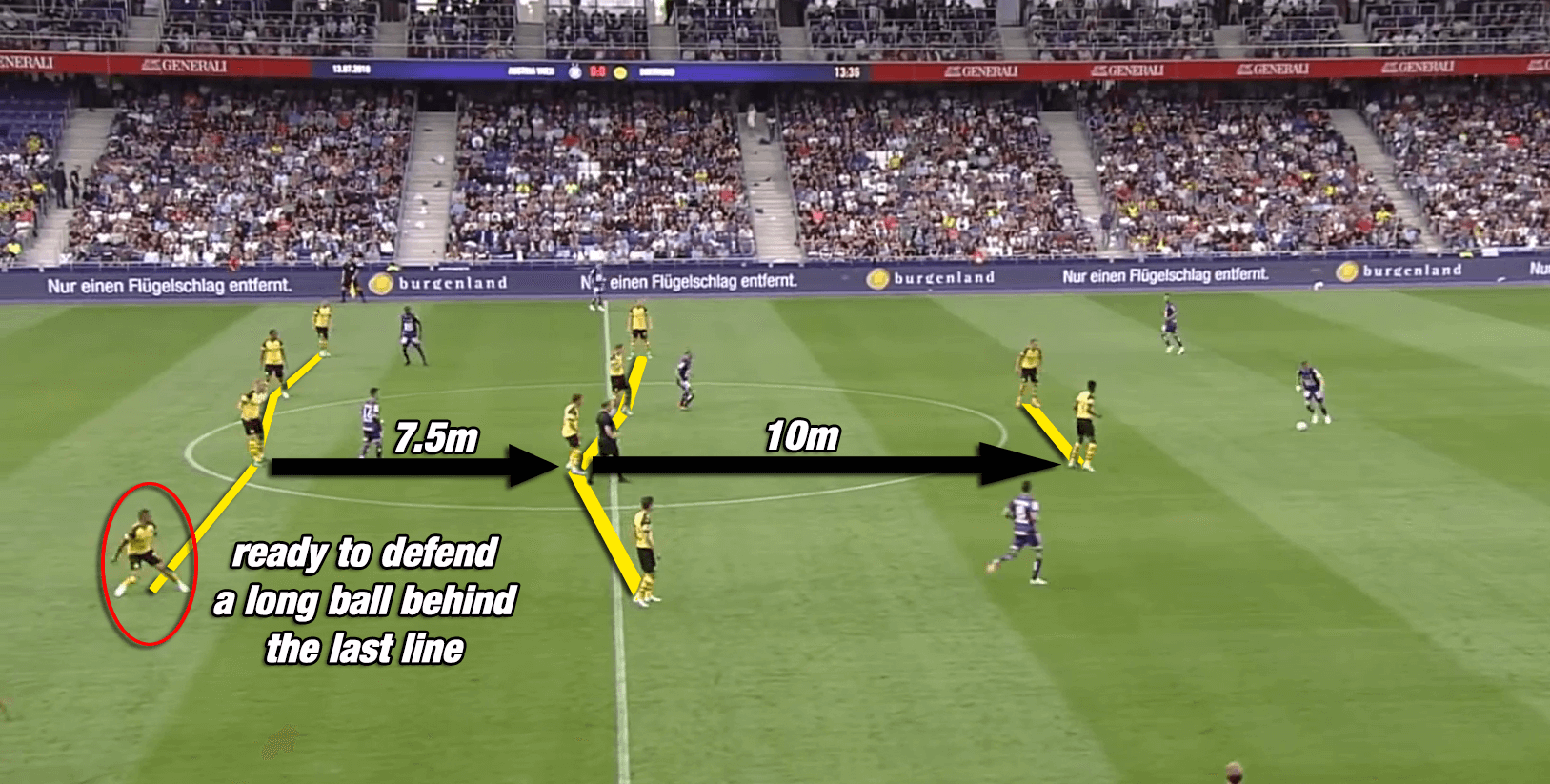 The defensive organization will not be a sorcery but might be effective. Most Bundesliga teams struggle to find solutions in tight spaces. As Favre does not seem to play a high pressing, the back line will not offer much space in behind either. This can facilitate defending long balls.

In addition to the creation of goalscoring opportunities during the possession phase, Favre could make use of the pace of his forward players in transition moments. In his first training sessions at Borussia, the squad also practised quick counter-attacks after regaining possession.

To sum up, the squad includes a lot of potential. With small adjustments, Borussia Dortmund will be able to play the short passing combination play, Favre prefers. Most of the players fit into a possession-based approach. Lucien Favre is spoilt for choice who to line up, especially in the central midfield where BVB has an oversupply of players.

Moreover, we do not know the exact formation Favre will deploy in his first season for Dortmund. But there is one thing we know for sure: Borussia will continue their path of playing a constructive style of football.

BVB get unwanted record after losing 3-2 to Werder Bremen

Kovac, Rangnick, and How the New Bundesliga Managers Will Fare This...

Dortmund’s new signing is determined to follow in the footsteps of...

Transfer News: Will Bellingham make a move in the summer?

A Sale, A Steal and a Swap Still To Come For...