Last season saw Borussia Dortmund enjoy something of a transition year. Having parted company with coach Thomas Tuchel at the end of the 2016/17 season their search for a new coach led to them appointing the former Ajax coach Peter Bosz. The Dutchman however not last long in Dortmund and he was replaced in December by the Austrian coach Peter Stoger. Neither coach captured the imagination of the passionate Dortmund support and the club was lucky to finish fourth in a Champions League qualification spot. Prior to the appointment of Bosz, however, the clubs first choice had been the former Borussia Monchengladbach coach Lucien Favre, currently coaching in France with Nice, the deal could not be done but for the 2018/19 season, Favre has been signed to coach Dortmund.

We are only three competitive matches into the Favre’ era at Dortmund but there are already definite signs that he is firmly putting his stamp on the side. Summer recruitment was interesting if not spectacular with the French central defender Abdou Diallo signing from Mainz and midfielders Thomas Delaney and Axel Witsel joining from Werder Bremen and Tianjin Quanjian respectively. In terms of attacking reinforcements winger Marius Wolf moved from Eintracht Frankfurt and in the final stages of the transfer window, the Spanish international forward Paco Alcacer arrived from Barcelona.

Over the course of the transfer window then Dortmund had strengthened the spine of their side considerably and, perhaps more importantly, they had moved to sign two central midfielders, in Delaney and Witsel, who fit with the tactical identity that Dortmund will look to instil at the club.

Even though they are only three competitive matches into the season with a win over third-tier Greuter Furth in the DFB Pokal and a win over RB Leipzig in the opening match of the season before drawing 0-0 away to Hannover 96 we have still seen enough to get a sense of where Favre wants to take this team from a tactical point of view.

The Defensive Phase – The Yellow Wall

When a new coach takes charge of a club one of the most common tactical concepts that the coach will work on first is the defensive shape. The long-held belief in football is that you should always look to build your team from the back to the front and out of all the aspects of Dortmund’s game model so far under Favre it is the defensive phase that looks the most complete and effective.

Gone are the days of gegenpressing (counterpressing) that Dortmund utilised so effectively under their former coach Jurgen Klopp and instead Favre has installed a more structured defensive approach with a medium block looking to only press the opposition situationally, when they make an error in their build-up or when they enter the Dortmund half of the field. 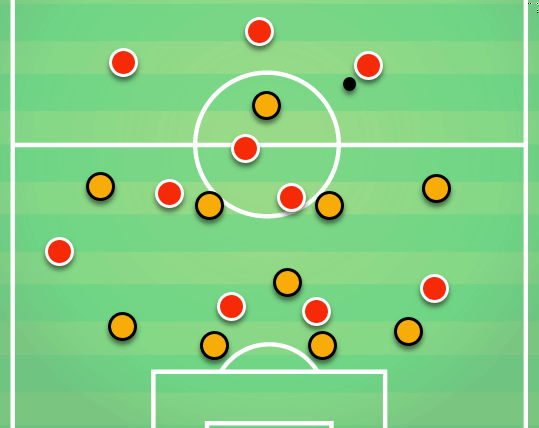 As you can see from the image above Dortmund under Favre will look to defend in a 4-1-4-1 shape with Axel Witsel being the midfielder that looks to sit deeper and shield the centre of the defensive unit. That may change when the young German midfielder Julian Weigl is ready to return to the first team and we may well see Weigl deployed deeper and Axel Witsel playing more as one of the two 8’s. What is key in terms of defensive structuring from Dortmund is that the defensive block is exceptionally well organised with excellent spacing across the width of the field. 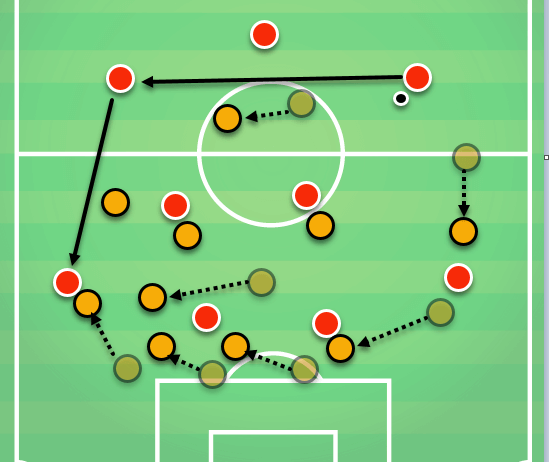 Once again there are real differences in the way that Dortmund look to transition from defence to attack under Favre when compared with their successful spell under Klopp and Tuchel. Under Klopp, in particular, Dortmund were noted for their rapid transitions from defence to attack, they moved the ball quickly and used the pace of their forwards to stretch the opposition defensive structure before it got a chance to fully develop.

To go along with the more nuanced and passive defensive structure that Dortmund are using under Favre they are also more measured with the way that they transition into the attacking phase. 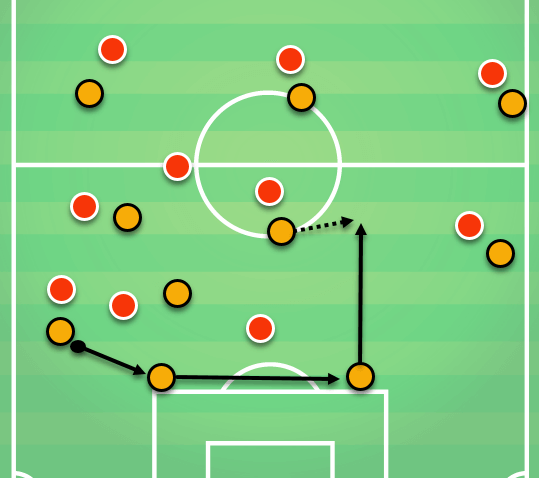 The graphic above shows a situation from their match away to Hannover 96 with the opposition pressing high and Dortmund having just gained possession there was no sense that Dortmund would look to connect with a direct transition. Instead, the ball was rotated from one side to the other with Abdou Diallo escaping the press and moving forward with the ball. This more ball orientated approach to the transition is effective given that it offers greater security in possession and allows for the Dortmund players to move into their attacking positions before looking to progress the ball into the opposition half of the field. 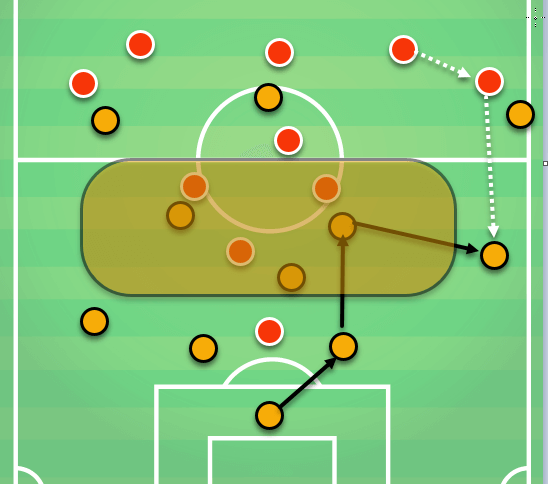 In transition the midfield three of Delaney, Dahoud and Witsel also look to keep themselves on the goal side of the opposition midfield line, whilst this offers strength in terms of the ability to move the ball and construct a solid positional approach it does not offer the opportunity for short passes beyond the midfield line that would give Dortmund an advanced platform from which to play from.

In Mahmoud Dahoud, Dortmund has a midfield player that has the skillset to make those movements behind the opposition line or even to drive with the ball at his feet to break the line. The fact that he has not looked to do so at this point in the season would suggest that he is following instructions from the game model that the coach has installed. These movements beyond the midfield line may well develop as the season goes on and they would add another layer to the attacking transitions for Dortmund that would prove extremely effective in the long run.

To this point in the season, Favre has gone with a front three of Marco Reus on the left, Marius Wolf on the right and Maximillian Phillip leading the line. The introduction of the young English winger Jadon Sancho, with Reus moving centrally, has often been the catalyst for a positive change in the attacking phase but at the moment Sancho is having to be content with a place on the bench. Lucien Favre will also have to find a way to integrate Paco Alcacer into the team soon.

At the moment though the movements and positioning of the front three are largely intuitive with their individual player ID’s going a long way to dictating exactly how Dortmund play in the attacking phase. The case in point comes from the two wide players. 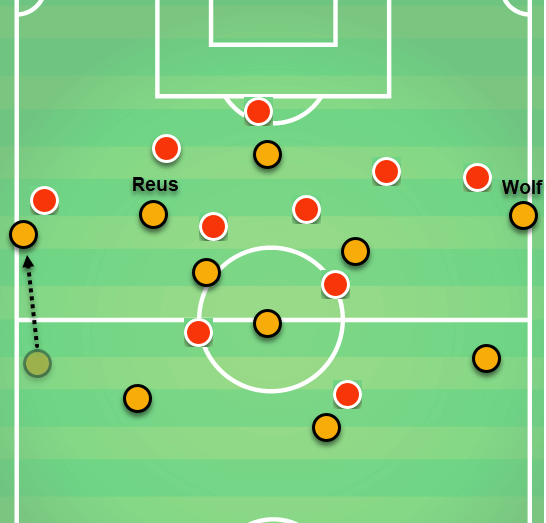 Marco Reus and Marius Wolf are cases in point. Although on paper one will play from the left side and one will play from the right the reality is that their positioning is very much dictated by the way that they play the game. As you can see above with Dortmund in possession in the midfield Reus takes up positions either in the left half space or even in the central areas, this movement is balanced out by the Dortmund left-back who will look to move high in order to provide width on the left. On the right side, however, Wolf is more of a conventional winger and he will look to maintain a wide position on the right with the right back blocked from advancing too far forward.

It is far too early to decide whether Lucien Favre is going to be a success at Borussia Dortmund or not. With that said there is a definite sense already that he has a clear game model and that the club is supporting him, in terms of recruitment, to achieve that model.

As the season progresses I would expect to see the more creative players given a greater sense of freedom in the attacking transition and when this happens Dortmund could well go on to establish themselves as a side capable of challenging Bayern Munich for the Bundesliga title.

BVB get unwanted record after losing 3-2 to Werder Bremen

Early summer transfer spending shows how proactive the Bundesliga is

Time To Prove Dortmund Is Still On The Cutting Edge of...