Borussia Dortmund went into the DFB-Pokal 2nd round fixture against the 2. Bundesliga side FC Union Berlin as one of the most in-form teams in the top 5 leagues, remaining undefeated after their first 9 league games (with 6 wins and 3 draws), scoring an impressive 29 goals whilst only conceding 10. Their form hasn’t been limited to the league either, with impressive wins over both Monaco (3-0) and Atletico Madrid (4-0). All the signs pointed to a tough game for Union Berlin. 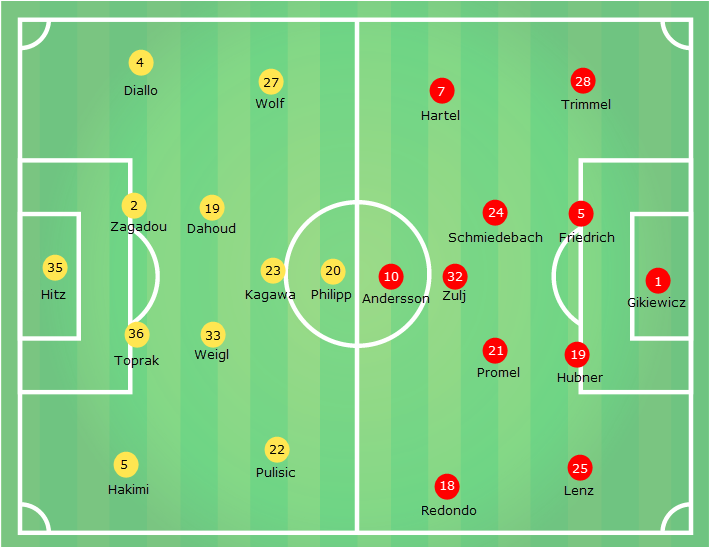 Rotation is likely to be important for Lucien Favre’s Dortmund if they’re to maintain the early levels of performance they’ve started with, so it was of little surprise to some heavy rotation within the starting line-up.

Veteran goalkeeper Marwin Hitz got his first minutes in goal since his summer move from Augsburg, he commanded a defence made up of Abdou Diallo at left-back, with a partnership of Dan Axel Zagadou and Omer Toprak at centre-back with Real Madrid loanee Achraf Hakimi keeping his place at right-back after a number of impressive performances.

The Dortmund midfield saw 4 changes from the 2-2 draw against Hertha, with only Mahmoud Dahoud keeping his place. He was partnered in central midfield by Julian Weigl who has had a hard time breaking into the Dortmund team recently, with Christian Pulisic and Marius Wolf on the wings. Shinji Kagawa started in his favoured attacking midfield position, just behind Maximilian Philipp.

Union Berlin, however, stuck with a similar team to the one that drew 0-0 against Dynamo Dresden at the weekend, with just 4 changes – Christopher Lenz coming in at left-back, Marcel Hartel on the right-wing, Robert Zulij in attacking midfield and Kenny Redondo at left-wing.

I went into the game expecting a confident Dortmund performance based on their most recent games, and with the team picked aiming to be impress Favre whilst pushing for a starting spot in the league but instead found the first half was a strange game of football. Perhaps the Dortmund players were a little too eager to impress, which instead impacted negatively on the standard of football that was played, with it feeling like a training game at times with many sloppy mistakes all over the field – although particularly in the final third of the pitch.

One of the golden rules in football is that the simplest option is often the best option, and time after time Dortmund did the opposite, gifting the ball to Union Berlin.

In the above picture we see Zagadou (circled in yellow) attempt to move the ball forward, but instead of passing to one of the other closer Dortmund players who are in space, he attempts to move the ball through the lines too quickly, resulting in losing the ball.

Whilst it’s harsh to criticise Zagadou for this, his team-mates were more at fault for repeatedly trying to play no look passes that instead of reaching a team-mate instead trickled out of play for a Union Berlin throw-in, which happened on 2 occasions within the opening 13 minutes of the match with the below attempt from Kagawa particularly painful to watch – especially as the player the pass is intended for is in his vision as he’s running for the ball. 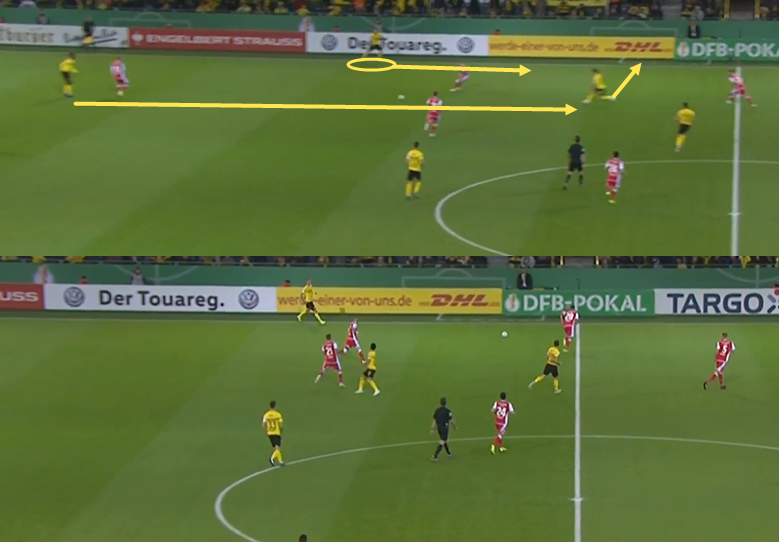 With passing like this it’s not surprising that Dortmund couldn’t carve out many chances, I recall just 2 touches in the Union Berlin box in the first half – both coming from Pulisic, with a fantastic run and nutmeg on a Union Berlin defender just after the half an hour mark, with his goal also coming from inside the box after some fantastic work by Dahoud to cross the ball for Philipp to guide his header on target, with Pulisic pouncing on the initial save by Gikiewicz.

Whilst Dortmund were lacklustre in attack, the opposite was true when it came to defending. Favre had got his Dortmund players to deploy selective pressing – at times the forwards would surge forward with blistering pace to close down the Union Berlin defence when they were on the ball, whilst at times they were happy to let the centre-backs have the ball, instead dropping back and keeping their shape.

Philipp in particular made a couple of lung-busting runs to close down the Union Berlin players, including one memorable run in the opening seconds of the match where he closed down Hubner (a Union Berlin centre-back), before then chasing down Hubners back-pass to his goalkeeper – almost making it and forcing the goalkeeper to go long, which resulted in a turnover of possession. 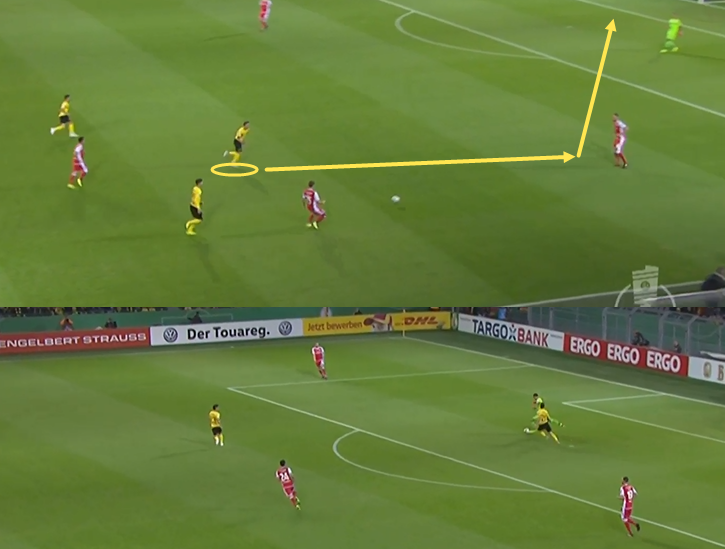 Many times throughout the match, the Dortmund forwards pressed high up the pitch, leaving a huge gap between the midfield and the forwards, with the aim of forcing Union Berlin long. With the Dortmund midfield so much deeper, it enhanced their chances of winning the aerial ball – or at worst the second ball if they don’t win the aerial ball. As you can see below, you can’t even see the Dortmund central midfielders in the picture as the Union Berlin player is forced to launch the ball forwards.

As mentioned earlier, the game against Union Berlin was the debut for 31-year old Swiss goalkeeper Marwin Hitz who joined on a free transfer from Augsburg over the summer and I’m sure Dortmund fans were intrigued to see their new signing in action, however, during his debut he didn’t particularly cover himself in glory.

With not even a minute on the clock, he’d gifted possession to Union Berlin twice, the first of which punting the ball upfield, despite Dortmund players being on for a simple pass and calling for the ball, and the second kicked the ball out for a corner (although he was sold a bit short on the back-pass by Toprak!)

I also felt Hitz could have done better on the 2 goals conceded – especially the first goal. Ex-QPR player Sebastian Polter fell and clipped the ball on the way down from about 13 yards out, it wasn’t a particularly hard shot and I don’t feel he should have been beaten from a scrappy shot like that from that distance.

That being said, Hitz did make a couple of good saves throughout the match, but consistency is key for a goalkeeper and I’m sure he feels that his debut could have gone better.

Whilst the first half display by Dortmund was a bit lacklustre and lacking in the final ball, the second half was much improved (despite conceding twice), with increased penetration and build-up play and Dortmund always looked like winning from that point onwards. All credit to Union Berlin though, they never stopped fighting which made for a fantastically entertaining game of football.

3 Players Dortmund need to sign to challenge for the Bundesliga...