This post initially featured on our dedicated analysis site for football around the globe, totalfootballanalysis.com

Borussia Dortmund extended their lead to nine points heading into the Christmas break. Lucien Favre’s yellow and black army beat Werder Bremen 2-1 at the electric Westfalenstadion, making that six league wins in a row and adding to their unbeaten run.

Thirty-eight of the last 55 teams to head into the break at the top of the table have gone on to lift the Bundesliga title. Hopes are high in Dortmund. In the signature ‘modern jazz’ style of Favre’s side, a dynamic, thrilling and multifaceted performance should have ended in a goal tally higher than two. Despite this, his side performed in a way fans have come to expect. But what exactly did they do? In this tactical analysis, I’ll explore that a little deeper. 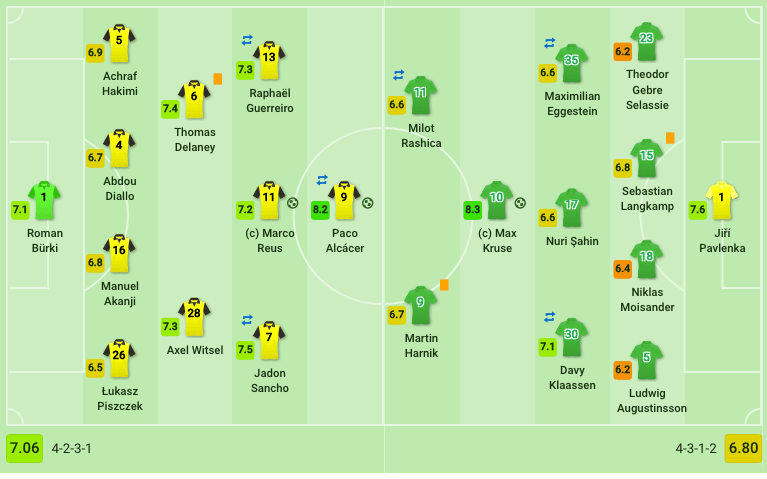 The line-up for the home side remains relatively uniform with the tried and tested 4-2-3-1, leaning on the double pivot of Thomas Delaney and Axel Witsel to transition play from front to back. One change, however, was the addition of Raphaël Guerreiro to replace Jacob Bruun Larsen after his virtuoso performance against Monaco in the Champions League.

Florian Kohfeldt’s Werder Bremen side stuck to the 4-3-1-2 that found success in their last league outing against Fortuna Düsseldorf.

Favre has been intent on creating a strong tactical identity at the club. One of the key aspects of his ‘modern jazz’ football is the ability to control the pace. Dortmund build play from the back patiently before exploding into action. Like the musical style, it’s unorthodox and unpredictable nature is endlessly exciting for fans. Unlike the music though, it can be a real headache.

Favre has implemented strict confines within which the players can apply more creativity and freedom. This is particularly evident in their impressive tempo shifts. There are two main avenues of attack. Both were apparent against Bremen and both were effective.

The main way is the build-up from the back. The two centre-backs, Abdou Diallo and Manuel Akanji, collect and move the ball scanning for space and combining with the double pivot of Delaney and Witsel.

Dortmund’s often-aggressive pressing means that their high recovery is another situation where they are particularly dangerous. Another of Favre’s favourite tactical signatures, it created the side’s second goal against Bremen.

Witsel often inhibits a very central position, moving between left and right with Delaney, but very rarely straying too far wide. His role here is imperative to the way Dortmund are able to make quick transitions.

Consistent and crucial, his role can easily be overlooked. Despite the differences in systems, he has very similar attributes to a prime Michael Carrick at Manchester United. Both have a great way of breaking up play, and a great sense of positioning.

Statistically, he was strong exactly where you’d want him to be. His 99% pass success rate was the highest on the field (for anyone with over five passes), which is all the more impressive considering his 68 passes were only one shy of being the most on the field. He had the highest possession of the ball on his side (6.5%) and took the second most touches (86).

Bremen didn’t make it easy for Dortmund at times, so having the option to keep a hold of the ball was imperative in such a match. Alongside Delaney in the double-pivot role, they are arguably the most important aspect of Favre’s tactical philosophy.

Clinical finishing from the half-space

Although Dortmund utilise the wings to build up a lot of their attacks, it usually isn’t for crossing. With only eight crosses to Bremen’s 26, Dortmund instead focused their attacks through the half-spaces.

These areas, especially on the edge of the box, are prime Dortmund real estate. From here they have players that are willing and able to pass, dribble or shoot their way to a goal. With 41 goals in 15 games (2.73 per game) they are also Europe’s most clinical side.

Heading into this game, Dortmund were matched only by Paris Saint-Germain in the ranks of Europe’s most clinical squads, with both converting 21.5% of all chances. Favre’s penchant for eschewing the wings as an attacking outlet and working in the half-spaces is paying dividends.

It helps to have a goalscorer like Alcácer as a spearhead. It is, however, worth remembering that only two of his goals, including the one against Bremen, came from a starting position. The other nine were all from the bench. Alcácer is himself a case-study in economic finishing. Before this match, all 10 of his shots on target ended up as goals. No keeper had yet stopped an on-target effort from the Spaniard.

Dortmund’s tried and tested formula came out on top once again. It could easily have been two or three more goals for the home side. However, Bremen were also threatening and on a couple of occasions almost made their opponents pay for opportunities squandered.

The upcoming Bundesliga tie against 16th placed Fortuna Düsseldorf shouldn’t cause the in-form side any problems. It’s a chance to stack up on their goal difference and to do that, they need look no further than playing some more of that exhilarating ‘modern jazz’ football that they’ve been getting into the swing of.

If you love tactical analysis, then you’ll love the digital magazines from totalfootballanalysis.com – a guaranteed 100+ pages of pure tactical analysis covering topics from the Premier League, Serie A, La Liga, Bundesliga and many, many more. Get your copy of the FIRST of two December issues for just ₤4.99 here, or the SECOND of the December issues with an annual membership right here.

Luck Firmly On Dortmund’s Side As Pulisic Bags Winner Late

Haaland set to Leave Dortmund at the end of the season

‘Very mature’ – Dortmund is the right club for English teenager

Midseason break could favour Die Borussen over than Bayern