This tactical analysis of Bayer Leverkusen vs Borussia Dortmund originally featured on totalfootballanalysis.com

Bayer Leverkusen hasn’t had the greatest of starts in the Bundesliga this season, with 2 wins and 3 losses out of their opening 5 games, although they have faced tough opposition in Gladbach, Bayern Munich and Wolfsburg. In contrast, Borussia Dortmund has had a near perfect start, going unbeaten in their first 5 games (3 wins and 2 draws). Both sides finished equal on points last season, so both teams knew this wasn’t going to be an easy game. 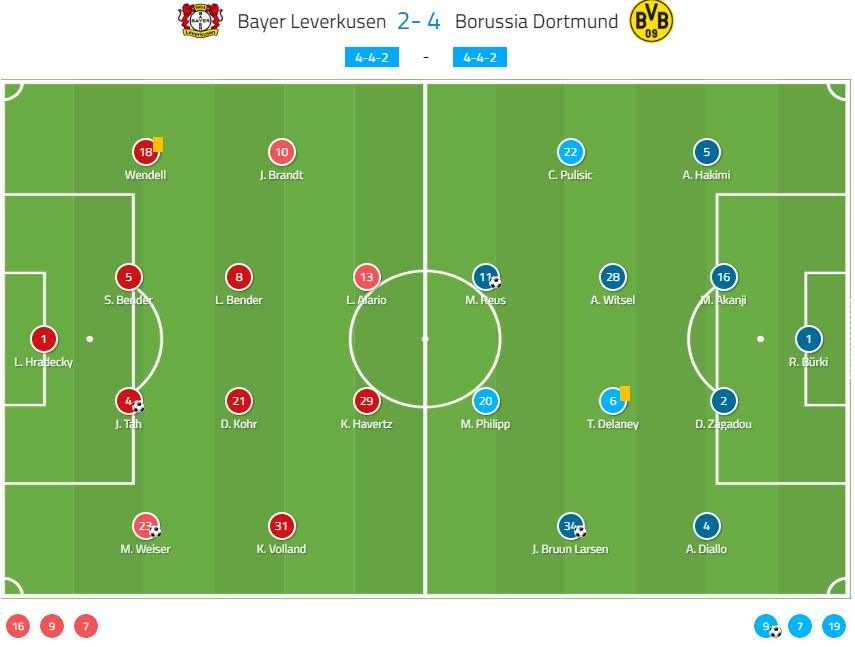 Whilst the above picture shows both teams playing a 4-4-2, it was more like a 4-2-3-1 system deployed by Leverkusen.

Bayer Leverkusen instead dropped Kai Havertz back into midfield behind Lucas Alario, with Julian Brandt and Kevin Volland providing pace and trickery on the wings. Lars Bender and Dominik Kohr provided the midfield stability with a back 4 of Wendell, Tah, Sven Bender and Weiser.

The game (in particular the first half) was played at an incredible tempo, with Leverkusen, in particular, deploying an incredibly high press w which made for compelling viewing as seen in the below examples. 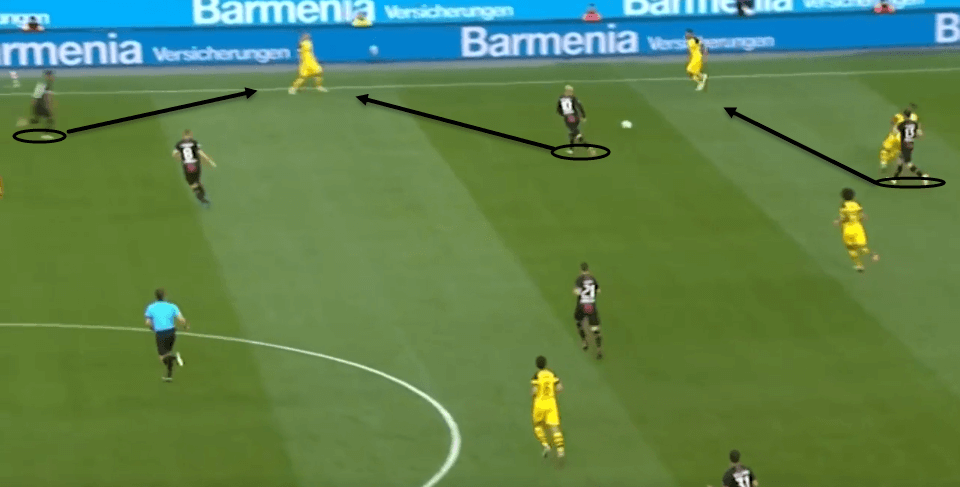 This incredible press inevitably sucked players from both teams into the area where the play was happening, meaning a majority of players on the pitch generally tended to be cramped in a small zone as seen below.

This had the effect on creating plenty of space in areas where the ball wasn’t in play which lead to both teams moving the ball quickly to try to navigate between each teams press to move the ball into space. This space tended to be created mostly in wide areas, and it was telling that 4 out of the 6 goals in the match were assisted from these wide areas. 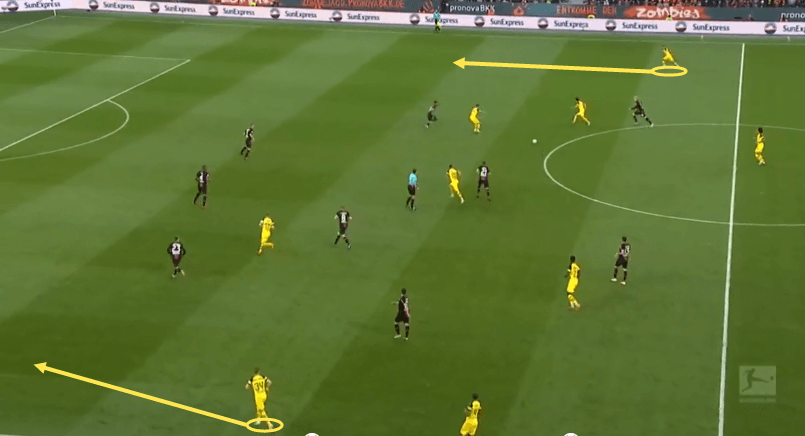 Bayer Leverkusen also adopted the approach of playing plenty of diagonal balls in order to bypass the centre of the pitch, which included this exchange with Leverkusen switching the play twice in quick succession.

Dortmund instead took a more structured approach to defending, instead focusing on getting numbers behind the ball whenever Leverkusen attacked, or cutting off passing lanes rather than relying on power in numbers. 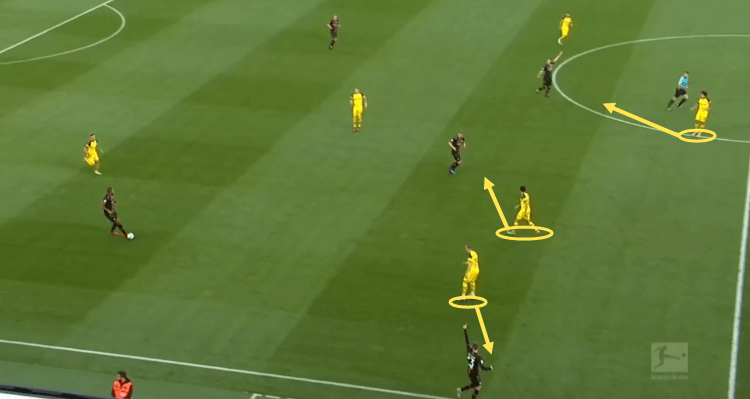 In the above example, Dortmund don’t press the Leverkusen player on the ball (except for the player behind the ball!), instead dropping back and ensuring that any immediate passing option is cut off – forcing the Leverkusen player to play a longer ball – increasing the chances of a turnover in possession

I’m a big fan of this defensive system and it would be one of the optimum systems – Guardiola, Sarri, Joachim Low are all fans of it and always post up good defensive numbers so it’s obviously a highly effective system.

This system when broken down consists of 3 components, Line 1 in the picture above are usually fast players – these are also players who are usually either weak in the air or physically small. They are used for springing a potential counter-attack and stopping any balls towards the edge of the box or blocking any shots from their area. In this particular instance, those players are Pulisic and Larsen who are great fits for this role.

Line 2 are the blockers, rather than man-marking any potential aerial threats, these players delay the runs of the attackers and basically try to stop attackers from reaching the areas where the ball is likely to be aimed towards. These players tend to be a mix of physically strong players or simply players who don’t fit into lines 1 and 2.

Line 3 are the “cleaners” and usually players good in the air, with the other lines doing their job, the players in line 3 should have a relatively easy time getting rid of the ball.

What interested me about Favre’s approach was that both lines 1 and 2 were a fair bit deeper than any team I’ve previously seen use this system as you can see from the below examples. 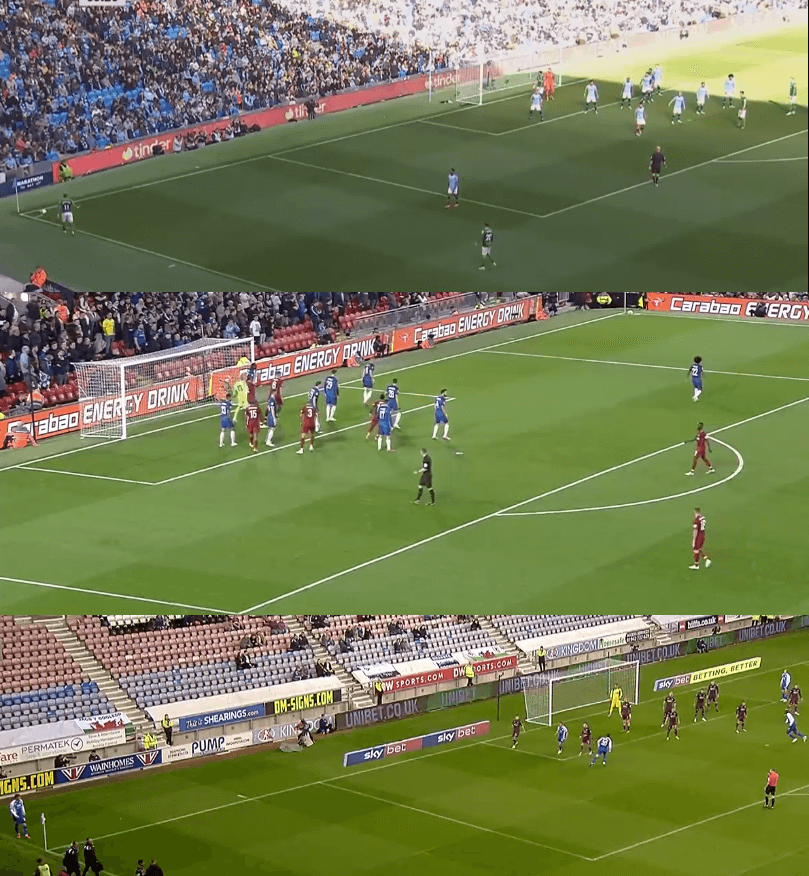 Personally, I can’t see any reason for Dortmund to drop their players back this deep and I would prefer to instead put Line 3 just in front of the 6-yard area – the most likely area for the ball to reach. It’ll be interesting to see Dortmund’s defensive corner record at the end of the season to see if it’s any better than the above teams.

As mentioned earlier, Borussia Dortmund had an incredibly young defence, but it wasn’t them that ended up getting the headlines with youngster Jadon Sancho staking his claim for a starting spot in next weekends game, with an absolutely phenomenal appearance off the bench. Despite only playing 22 minutes, Sancho created 4 chances, and grabbed himself 2 assists and managed 18 touches of the ball – just 4 less than Philipp did in 63 minutes.

Kai Havertz for Bayer Leverkusen did start the game, however, and also impressed me with his game intelligence and technique, and it was this technique that led to Bayer Leverkusen’s opener, taking 2 Dortmund players out with his dribbling before playing a pass out wide for Alario to cross in before Weiser rifled home a superb volley.

This game had it all, being both highly entertaining and tactically interesting with goals galore and played at a frantic pace. Dortmund maintains their unbeaten start to the 18/19 season whilst another defeat for Leverkusen will sting hard. That being said, I was highly impressed with what I saw from Leverkusen and fully expect them to pick up some vital wins soon as their next 3 fixtures are significantly easier than the opposition they’ve been drawn against so far.

Dortmund’s flakiness is reflected in the odds

If loyalty had a face…

Complete package: Dortmund new signing has his career back on track