The match between Borussia Dortmund and RB Leipzig was already a battle for Champions League spots on the first matchday. As both sides played under new head coaches, one did not really know what to expect. Nevertheless, both sides prefer to control the game. Compared to Dortmund’s possession-based approach, Leipzig prefer to create chaotic situations to control the transition phases. Therefore, the match was also a battle between two different tactical approaches. In the following, we will discuss whether the methods of the two teams were effective and promising for the future.

Dortmund and Leipzig both used different formations throughout the pre-season. Whereas Favre chose the 4-3-3 that he already deployed in several pre-season matches, Rangnick unexpectedly set his team up in an extremely centre-focused 4-3-1-2. 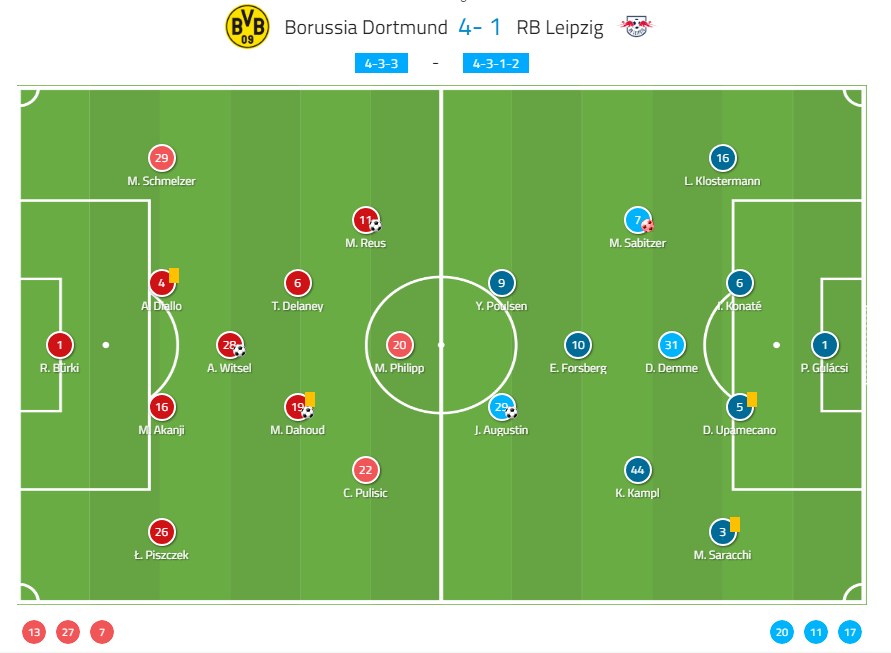 Favre lined up new signings Witsel and Delaney in the center together with Dahoud being preferred to Götze. The attack was built by Reus and Pulisic on the wings and Philipp as the striker. In the back-four, the young Diallo and Akanji played in the center and Schmelzer and Piszczek played as full-backs. Last but not least, Bürki won the battle in the goalkeeper position against Hitz.

Rangnick lined up Gulacsi as the goalkeeper, the youngsters Konaté and Upamecano as centre-backs and Klostermann and Saracchi on the full-back positions. In the midfield, Rangnick set his side up in a diamond with Demme as the single pivot, Sabitzer and Kampl as more advanced central midfielders and Forsberg on the playmaker position. Up front, Augustin and Poulsen were lined up as strikers and Werner was benched.

Leipzig began with a high intensity for which the sides of Ralf Rangnick are known. Thereby RB Leipzig scored the first goal of the match after collecting a second ball being more aggressive than the BVB defenders. Apart from the scoresheet, this scenario did not influence the further course of the match.

Leipzig attempted to disrupt Dortmund’s build-up early to counter-attack after winning the ball. Therefore Leipzig lead the ball to left centre-back Diallo. Two strikers should prevent Dortmund from playing to the full-backs using their cover-shadows. That way RB tried to force BVB inside. In midfield, Leipzig used a diamond shape to create numerical superiority in the center against the three Dortmund midfielders. The central-midfielder on the ball far side (most of the times Kampl) dropped a bit to support Demme.

Dortmund answered Leipzig’s press with Witsel who dropped between the centre-backs into a dynamic back-three. Thereby, Witsel dragged Forsberg out of the midfield. As Kampl dropped, Dahoud could receive and turn in the center. Whereas the ball near side was closed down, Leipzig offered Dortmund much space on the ball far side.

Dortmund used this space to switch play to Piszczek. Then, Kampl moved out to press Dortmund’s full-back which tore a huge hole between midfield and last line of defense. That way Dortmund was able to penetrate lines and progress the ball up the pitch.

Even though only one of the three goals Dortmund scored in the first half was scored from open play, these situations were key for the match and did cost Leipzig the chance on a victory. The two other goals were scored from set-piece situations that resulted from failed pressing attempts of RB.

Die Roten Bullen had some issues in their defence. The rest defense which only contained holding midfielder Demme and the back-four, often moved out of their organisation as well. This created further gaps for through passes. Especially on the left side full-back, Saracchi moved forwards occasionally in order to intercept a possible short pass. Instead, BVB punished this naive behaviour with passes behind the full-back leading to dangerous attacks.

Whenever Dortmund overplayed the press of RB Leipzig, Rangnick’s side struggled to stop Dortmund from the creation of goal scoring opportunities. Even when Dortmund did not attack the goal straight away but kept possession in Leipzig’s half, Leipzig failed to organise defensively. Often the midfielders were not able to cut off short passing options. BVB combined quickly through the half spaces to play through passes or to lay the ball off onto the wing and play crosses from there.

In the second half, Leipzig’s press massively improved as Rangnick adjusted his formation to the spacing of Dortmund’s build-up players. With the substitution of Timo Werner, Rangnick brought a third striker. The three strikers could press the back-three man-oriented and in central midfield, Delaney and Dahoud were marked by Kampl and Forsberg. Die Roten Bullen occasionally pressed in a 4-3-3 even though Kampl was supposed to play a double pivot with Demme.

That way Leipzig often forced BVB to play a long imprecise ball due to missing passing options. Konaté and Upamecano were able to win their aerial duels and regain possession for RB.

Dortmund struggles during the second half

After the adoption of Leipzig mentioned above, BVB were not able to progress up the pitch anymore. In defence, Dortmund formed a low-block with a back-four and a line of five midfielders. This kept Leipzig away from Dortmund’s goal, but not for a long time.

Furthermore, Die Roten Bullen impressed with good spacing in possession. With their double pivot, Leipzig had two main players building up the attack. The full-backs provided width whereas the strikers provided depth. Situationally, one of the strikers dropped in the space between midfield and defence of Dortmund to drag out defenders or to receive and turn. This method enabled Leipzig to create goalscoring opportunities in the second half. However, Rangnick’s side failed to score.

Due to the Leipzig domination in the second half, RB increased their xG value to 1.46 which is not too far away from BVB’s value of 1.96 goals.

Leipzig increased the risk further and further and only left their centre-backs to cover their attacks. During injury time, substitute Jadon Sancho used his pace for a counter-attack and assisted the 4-1 scored by Marco Reus right before the final whistle.

To sum up, BVB deserved the victory even though a 4-1 win seems a bit flattering. Leipzig failed to prevent Dortmund’s build-up especially in the first half and therefore fell behind since Dortmund effectively used their set-piece situations. In the second half, Leipzig revealed some issues of the defensive and offensive organisation of BVB, without being able to exploit them.

Whereas Leipzig lost the game during the first half because of their tactical approach, Dortmund struggled in progressing up the pitch when being pressed early which might be a more general issue. But it remains to be seen how both head coaches will attempt to eliminate their weaknesses.

All the things that could go wrong for Dortmund this season...

‘As a benchwarmer’ – 24 y/o midfielder needs to leave Dortmund...

Is Julian Weigl being earmarked by Manchester City?

Why there are positives for FC Cologne despite their relegation