It’s been a disastrous week in Monaco as the team continued its bad record and got defeated by Borussia Dortmund, going 0:3 down on Wednesday evening. The Monegasques have no point after two games in the group stage of Champions League (losing to Atletico Madrid in the first round). And the worse news is that they have only one win in eight games for Ligue 1 too.

Borussia Dortmund, on the other hand, has won four of their 6 matches in the Bundesliga, drawing two. The team has a better record in Europa too as it has the full package of points and is on the top of group A. Although going through Monaco wasn’t as easy as it looks. Their opponents created some very good opportunities, but few defensive mistakes were crucial for the outcome of the game.

But there is still something encouraging – both team’s youngsters pulled out great performances and it looks like the only thing missing for them is an experience.

There were a few players that had a huge impact on their team’s performance, so let’s take a closer look at what they did:

Most of the actions during the game were focused on the youngsters. Henrichs was doing perfectly good making runs on the left flank and his off the ball movement was often crucial on a counter-attack. His teammate Golovin on the other side made some perfectly measured through passes and created some chances. Unfortunately, it was all a waste as both strikers Falcao and Sylla couldn’t take advantage of these opportunities. Golovin’s creativity combined with Henrichs’ vision stood out and defined the tempo of Monaco’s game.

Although their passing accuracy percentage was not perfect, the youngsters deserve some credit as they managed to deliver 5 key passes combined.

Golovin made three of them and Henrichs added two, with two accurate crosses and two long balls. Benjamin impressed as he won 7/8 of his duels. He showed that he is equally important in every part of the pitch as he has both defensive and attacking contribution. 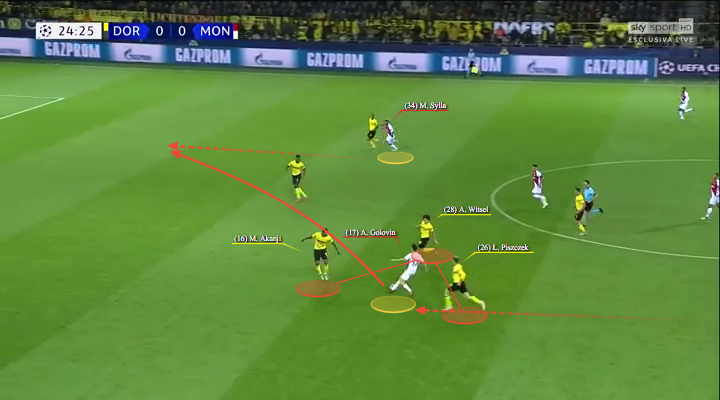 In here Golovin showed his strong decision-making and creativity. He had no option for a pass and was surrounded by three Borussia’s players. Just when you thought he is about to lose the possession of the ball he saw Sylla who can make a run towards the goal and sent a great through pass. 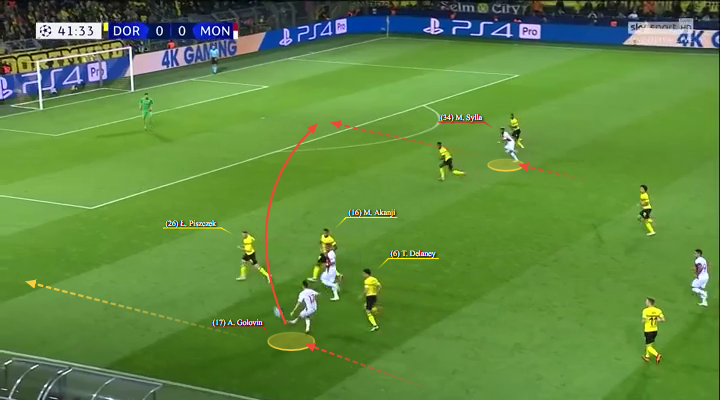 An identical situation here. Both him and Henrichs were covered by three players. Aleksandr had an option to make a run on the left but he saw that this would not be a successful attempt and once again made a perfect through pass to the edge of the box, after seeing that Sylla is in a good position to receive the ball. 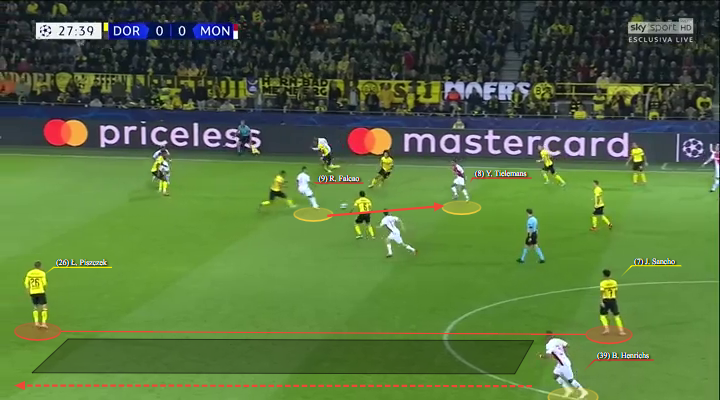 Sancho and Piszczek left Henrichs behind their back with a huge gap left for him to operate in. The 21-year old realised that Tielemans is perfectly covered and is going to look for an off-beat action. That’s why he decided to use the uncovered area and to make a run up-front, so he can receive the ball. 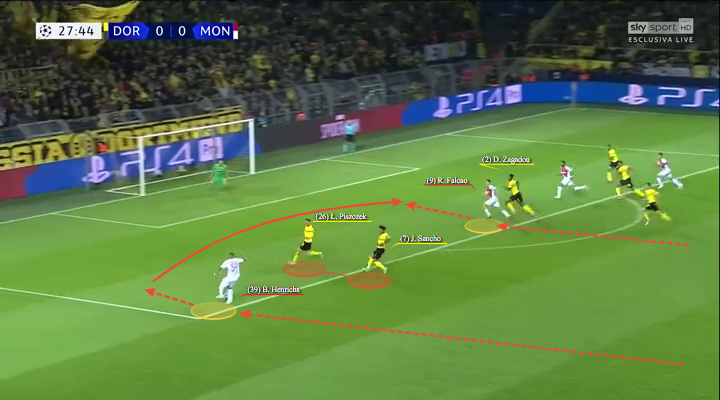 He then reached the box and made a nice cross to Falcao, who eventually missed. 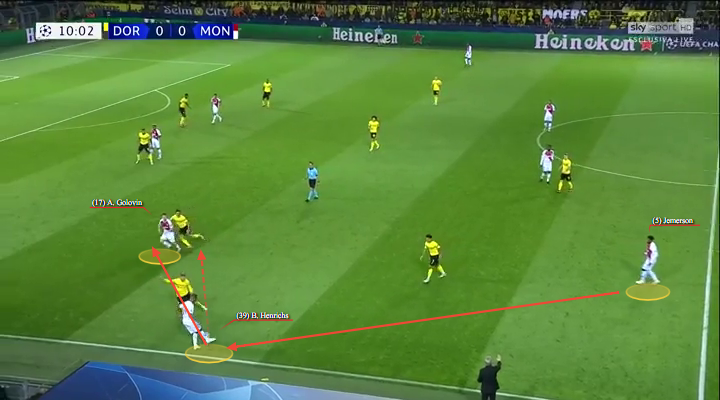 Benjamin received the ball and immediately sent it to Golovin, as he had no time to think as he was under pressure. 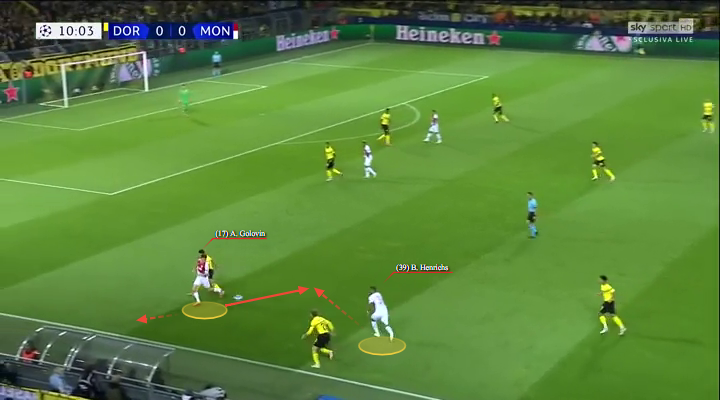 He then tried to distract his marked and gave the ball back to Henrichs who tried to free himself. 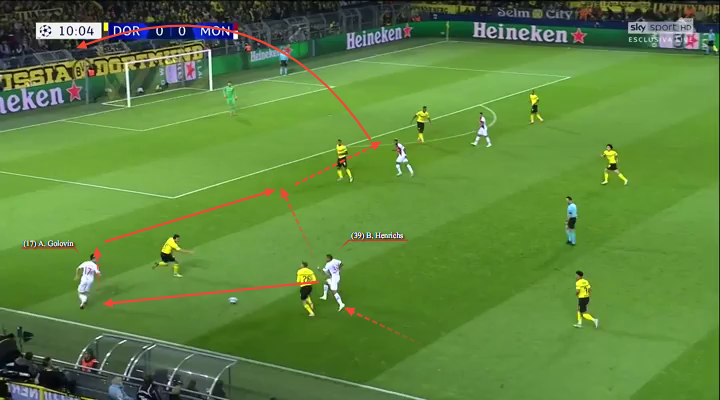 Golovin’s marker left him for a split-second following the ball and that’s when he and Benjamin managed to free themselves and combine, ending the effort with a pass to Sylla, who made a wide shot and missed. This is a clear example of their decision-making and vision.

Most of the issues in Monaco’s performance come from the back. They conceded three goals after the break – a result of poor defending, decision-making and communication between midfield and defence. It was not the best day for Jean-Eudes Aholou as he was often exposed. The only player with more focused defensive actions was Djibril Sidibe as he prevented the team from conceding even more goals with a few perfectly timed interventions.

A result of Kamil Glik’s desperate moves is the penalty he gave away in the 69th minute when Paco Alcacer hit the woodwork. 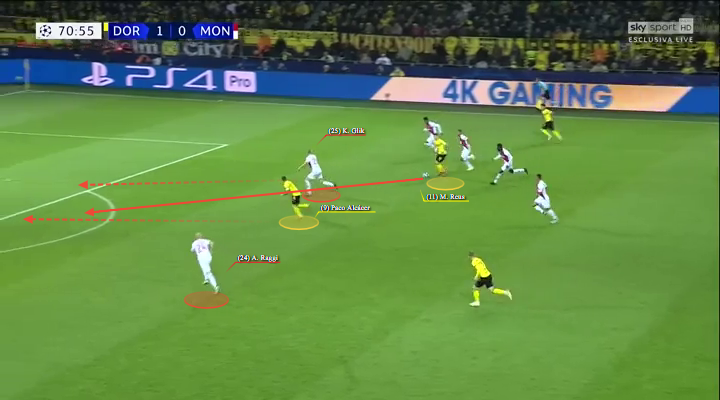 He wasted no time to make it up and a minute later scored for 2:0. Monaco was caught on a counter-attack and most of the players were busy covering Marco Reus, although they were already late. Then Kamil Glik wasn’t focused enough and left Alcacer slip behind his back and reach the edge of the box where he received the ball from Reus. Then poor defensive actions by Andrea Raggi and Danijel Subasic resulted in Paco dribbling and scoring.

The team was often caught on a counter-attack and the players couldn’t position themselves properly to prevent a goal opportunity. 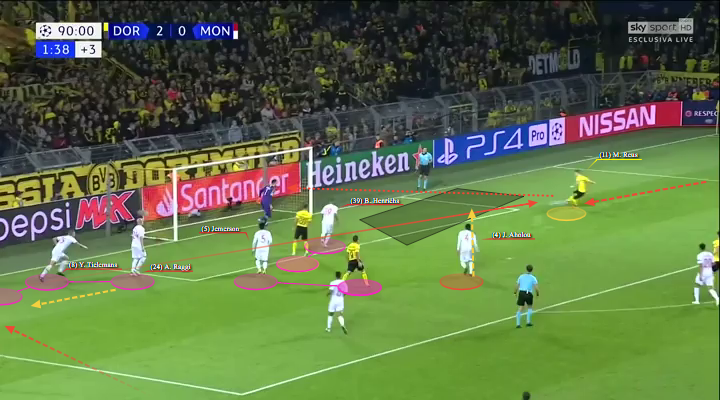 In here once again Monaco’s defensive positioning was not so good. They left the main man Reus completely uncovered and it resulted in him scoring (unexpected, eh?). While there was a disorganisation in the box, Marco made a speed run on the right, reached the box and received the ball with no effort from Aholou to reach it.

It is amazing to see how these two can work together – a mix of experience, attacking power, talent, creativity and passing ability. Not only they had some great individual efforts, but they also managed to combine well. 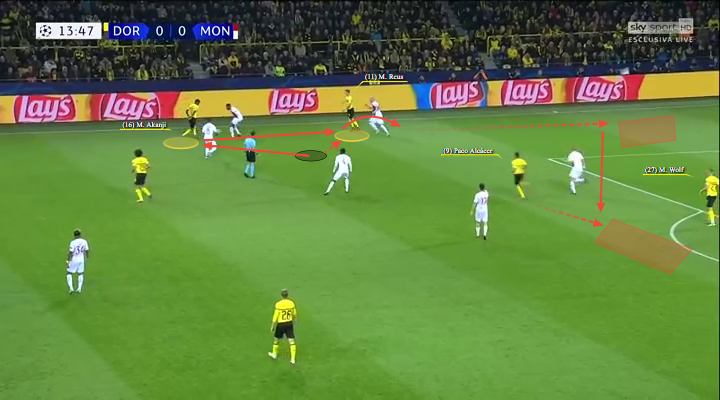 In the 13th minute, Reus received the ball from Akanji when on the touchline. Then he made a great dribble past his marker and continued forward. In here Alcacer should’ve made a few steps back to the completely uncovered area, where he could’ve received the pass from Reus and be able to finish the attack. 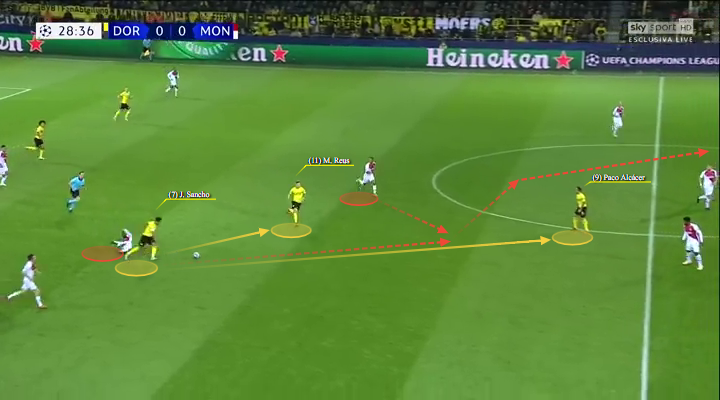 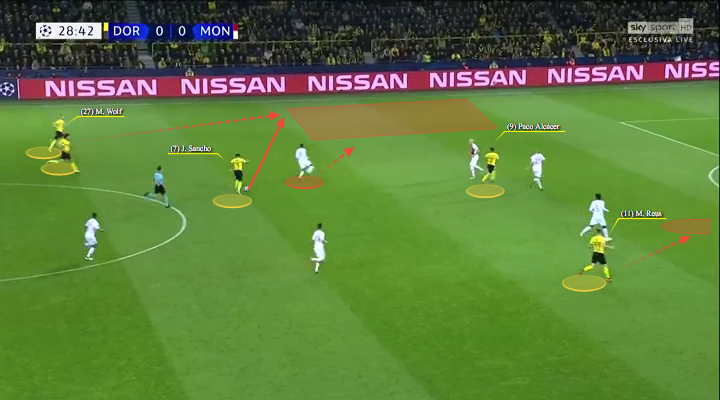 Sancho is a great playmaker. As you can see in this picture he had an option to pass to Reus or Alcacer but decided to make a run on his own. He won two offensive duels on the way and used the gap left by Monaco’s defence, so he can pass the ball to Wolf on the left. During this build-up, Paco and Reus positioned were open to receive the ball. It’s noticeable that the captain was left uncovered once again. 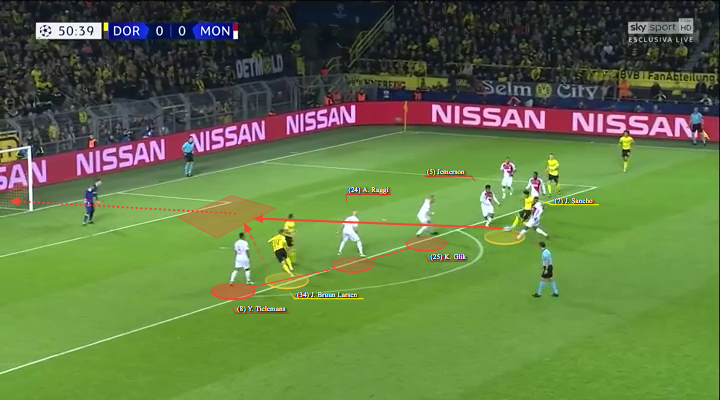 He contributed to the opening goal showing a strong decision-making. No matter of being under an immense pressure he found a solution to a perfectly measured through pass to the 20-year-old Jacob Bruun Larsen who came in as a substitute and opened the score for BVB. His performance stood out too as he contributed amazingly well too and not only scored but also made an assist for the third goal. 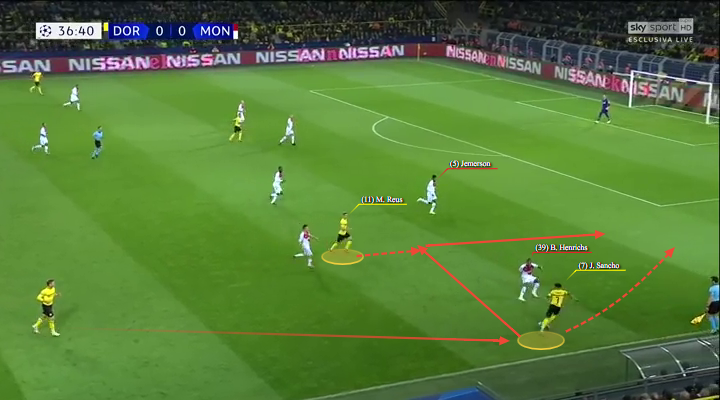 Reus and Sancho exchanged passes in the final third. Jadon received the ball on the flank but was put under pressure and made a pass to Marco. As soon as the ball left his foot, he made a good off the ball movement and went deeper so he’d be able to get the ball and make a cross to the box.

I could not miss mentioning Axel Witsel as the guy was a key part of the win with his 94% pass accuracy and 9/9 duels won and 3/ 4 tackles won.

Dortmund’s players were often caught unprepared and the right timing of their interventions was missing on a few occasions. Although most of the times they managed to counter-press their opponents, the Monegasques found the solution in the shots from distance and created some dangerous chances, but the finishing wasn’t good enough, so they can score.

The pros and cons of this games were clearly defined. The best thing we could notice is that both teams have some great young players that can be very important team-wise once they reach their full potential.

In Monaco’s case, it’s not that the youngsters lack skills. As I mentioned some of them are doing a fascinating job out there. But it’s the lack of balance between experienced players and young players. Leonardo Jardim needs to find it soon or he risks the team going from second in the league to the second league.

There weren’t any huge issues that we could notice in Dortmund’s play, but I surely can see them coming. In my opinion, it is going to be extremely hard for the team once Marco Reus leaves. The manager needs to look for a replacement as soon as possible if he wants to keep the team’s stability. Otherwise, the team plays as one and everyone has their impact on the team’s performance and that was the key to success.

‘Very mature’ – Dortmund is the right club for English teenager

The Raw Materials Are There, Trust Me

A Preview of Borussia Dortmund’s Next Two Games