Heading into this game against Fortuna Düsseldorf, Bundesliga leaders Borussia Dortmund’s advantage at the top had been scaled back to six points after Borussia Mönchengladbach won their earlier kick-off.

With the pressure on to extend it back to nine, Dortmund seemed to fall apart. In what should have been a routine three-points, considering the form of both sides, Lucien Favre’s Dortmund lost the match 2-1 after a tactical masterclass from Fortuna boss Friedhelm Funkel.

In this tactical analysis, I’ll look at the way Funkel, spotting a weakness in Dortmund’s thus far fairly solid defence, ruthlessly exploited it throughout the match, causing problems and taking all three points from an unbeaten Dortmund side. 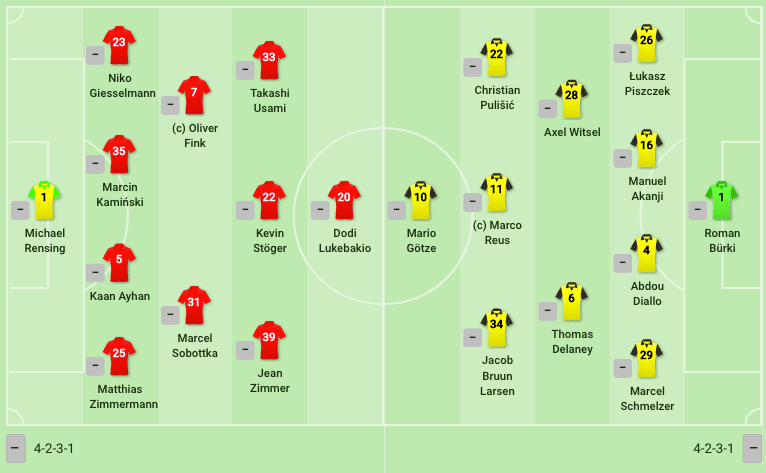 With one eye on his upcoming top of the table clash, Favre decided to rest some of his key players. Benched were Achraf Hakimi, Jadon Sancho, Raphaël Guerreiro and Paco Alcácer to be replaced by Marcel Schmelzer, Christian Pulisic, Jacob Bruun Larsen and Mario Götze respectively.

Funkel made considerable changes to his side after their 2-0 victory over Freiburg, most notably including the pacey Dodi Lukebakio up top in a 4-2-3-1, as opposed to the 4-4-2 of their last outing where he entered as a late substitute.

It seems strange to say it, but Dortmund looked to lack players capable of playing in Favre’s system. The starting XI seemed more than capable on paper. However, it became clear very quickly that they lacked the cohesion required to meet the fast and aggressive standards previously set.

Utilizing the wing is crucial for Dortmund to open up attacking windows in the half-space at the edge of the box. There were few such efforts until the late goal which involved two of the substitutes: Sancho and Alcácer.

Alongside Christian Pulisic, Jacob Bruun Larsen similarly struggled to make an impact on the opposite wing. Sancho was brought on as his replacement in the 60thminute and was immediately influential. With seven dribbles (88%), two key passes (one leading to a goal) and 90% success in duels, he shook the game up offering much-needed pace.

Likewise, Alcácer managed the same amount of shots in 30 minutes as Götze did in 90. With Alcácer up top, Götze joined the midfield pivot in a position he seemed comfortable in. With Pulisic seemingly on the way out and Favre’s excellent work in the transfer market so far, he will likely be looking to strengthen his squad again over the coming month.

It seemed like it was never going to come: a weakness in this Dortmund side. It did though and when it did, it was glaringly obvious. The inherent risk of Favre’s exciting brand of football is that players tend to work in fairly advanced roles. Their strength comes from the rapid transitions and tempo-shifts that take opponents by surprise.

What this means positionally is that the full-backs will play a more advanced supporting role to the double-pivot of Axel Witsel and Thomas Delaney and/or link-up with the wingers, leaving the centre-backs fairly isolated at the back. Funkel, spotting this obvious weakness, was quick to make them rethink their tried and tested approach.

Fortuna continued with the same approach and Dortmund seemed continuously troubled. Lukebakio was cleverly employed for his pace to serve exactly this purpose of getting on the end of long balls. Eventually, a pitch-perfect pass from central attacking midfielder Kevin Stöger split Akanji and Diallo for him to latch onto. This was the first time Dortmund had gone behind in the seven games since November’s Der Klassiker.

Fortuna were impressive at containing Dortmund’s high tempo football and, utilising a low block with moderate pressing, were often able to push Dortmund back and even force errors that lead to long passing opportunities from deep within their own half, like the one involved in the first goal.

The landscape of this game was unusual for Dortmund. The side normally averages around 55% possession, but against Fortuna, finished with around 73%. A great deal of uncontested play occurred in their own half as a response to Fortuna’s intelligent defensive play. Dortmund made a staggering 794 passes to Fortuna’s 296.

A low block and compact lines helped Fortuna counteract the dangerous half-space/wing territory highlighted above. Knowing this was a vulnerable area of transition, Funkel focussed his pressing and recovery here, emphasising the importance of winning the ball to trigger a run.

The heavily increased density of passing is also testament to Fortuna’s ability (with only 27% possession) to manage Dortmund moving forward. They contained rather than actively defended against.

As a rule, Dortmund tend to veer away from crossing the ball and instead opt for working it into the box through tight passing triangles. In this match, struggling to find their usual way in, Dortmund resorted to crossing the ball. They tried it 26 times with only 15% success.

Fortuna, as in the example below, often had 10 men (inc. goalkeeper) in the box at one time. This contributed to the lack of crosses reaching their target but also doubled up as a way to stop shots. Of Dortmund’s 10 shots, seven were blocked. Fortuna gave a lesson on parking the bus.

Funkel took a simple, yet punishingly effective approach to the game. Dortmund’s biggest strength? Build up play on the wings, funnelling towards sharp attacks from the edge-of-box half-space. His side intelligently defended, restricting all movement in and around these key areas.

Dortmund’s biggest weakness? The distance between centre-backs and advanced positioning of the full-backs. The key here was to send long balls through, utilising the pace of Lukebakio to give the defence a runaround. This was also incredibly successful.

For Dortmund, with their biggest match of the season coming up, sorting the defensive issue will likely involve Thomas Delaney dropping back in-between the two centre-backs or with the full-backs holding a deeper line. As for the attack, that comes down to Mönchengladbach’s willingness to sacrifice their own attack in order to stop Dortmund’s the way Fortuna did.

If you love tactical analysis, then you’ll love the digital magazines from totalfootballanalysis.com – a guaranteed 100+ pages of pure tactical analysis covering topics from the Premier League, Serie A, La Liga, Bundesliga and many, many more. Get your copy of the FIRST of two December issues for just £4.99 here or preorder the SECOND of the December issues with an annual membership right here.

‘Mouthwatering attack’ – If Man Utd could sign Sancho from Borussia...

Transfer News: Will Bellingham make a move in the summer?