This Champions League match analysis was first featured on our network site, totalfootballanalysis.com.

From time to time there will be a fixture that shows us a genuine clash of styles, this past week we saw one such fixture in Group A of the Champions League as Diego Simeone and Atletico Madrid travelled to Germany to face Borussia Dortmund. The Spanish side are well known under their Argentine coach Simeone for playing a compact style of football with the first priority being the defensive structure, Borussia Dortmund, on the other hand, are perhaps playing the best football in Europe at the moment with their attacking style of football proving too much for their opponents to take.

The last two seasons have not been altogether straightforward for Dortmund however, with the club struggling to properly replace the perhaps irreplaceable Jurgen Klopp as coach. Thomas Tuchel had the tactical acumen and technical ability but his ability to man-manage the players and deal with the club at board level were more questionable. Next came two coaches in one season with the Dutch coach Peter Bosz joining from Ajax and struggling to come to terms with the squad at his disposal. After six months Bosz was out and replaced by the Austrian Peter Stoger. Now, having gone through three coaches the club have returned to the man that was the allegedly first choice to replace Tuchel in the Swiss tactician Lucien Favre. It is still early days under the reign of Favre but the initial impression and the underlying numbers are extremely positive to this point.

To this point, Atletico’s season has been somewhat underwhelming, there were initial signs of a more attacking approach underlined by the summer acquisition of the French wide player Thomas Lemar but as the season has progressed we have seen the Spanish side revert to their defensive structure with the exciting French winger having the work rate and humility to fit in with Simeone’s system perfectly.

In this match there was a sense that something would have to give, would it be Atletico’s defensive strength or Dortmund’s attacking brilliance? 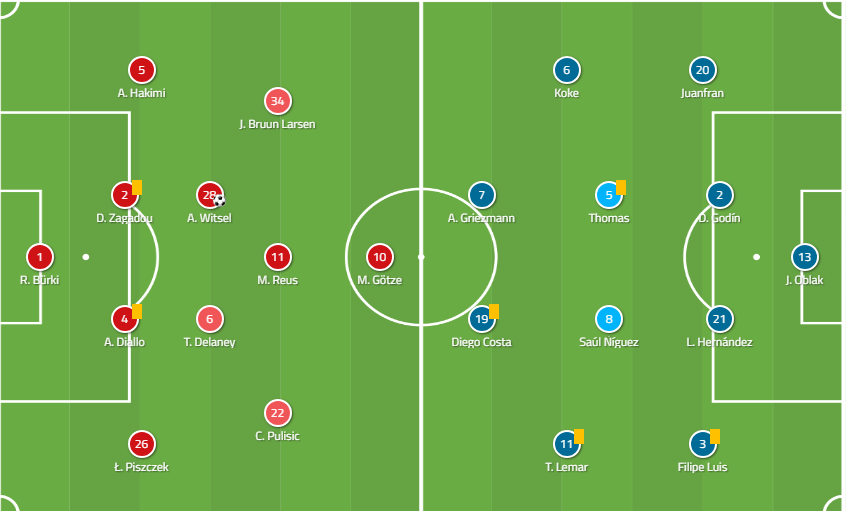 The home side started in a 4-2-3-1 structure that was extremely fluid in the attacking third. Marco Reus and Mario Gotze started the match together with each player taking a turn in leading the line whilst the other dropped into the ’10’ role. On the left side the exciting Danish attacker Jacob Bruun Larsen started ahead of the equally exciting English winger Jadon Sancho.

There were no surprises in the starting eleven from Simeone as Atletico lined up in their customary 4-4-2 structure with their strongest team.

Dortmund able to construct from the back

One of the most striking tactical aspects of this match was the ease in which the home side were able to construct their attacks from the back. Traditionally we have seen Atletico under Diego Simeone drop into a deep to medium block when out of possession, they do not press aggressively without the ball and instead look to remain compact to force the opposition to make a mistake when trying to find a way through to goal.

Normally, however, the Atletico defensive block is extremely adept at shifting quickly and seamlessly from left to right in order to prevent the opposition from comfortably playing around them in the wide areas.

In this match, the two French central defenders for Borussia Dortmund Abdou Diallo and Dan-Axel Zagadou were left with time and space to play expansively from the back line in towards the final third of the field. By allowing the central defenders the time and space to enjoy comfortable possession Atletico essentially ceded the advantage to Dortmund as the Germans were able to pick their way through the initial stages of the Atletico defensive structure.

In this example, both Diallo and Zagadou are in the Atletico half as Dortmund enjoy comfortable possession of the ball. I have shown the front two for Atletico, Antoine Griezmann and Diego Costa in their defensive positioning. On the far side one forward is closely covering Zagadou but when the ball is switched to Diallo on the right of the two he has space and time to advance forward with the ball.

Both Diallo and Zagadou are comfortable with the ball at their feet when running forwards with the ball and they both have the capacity to pass through the opposition lines when given this kind of time on the ball.

As the game wore on and as the German side took a firm grip on proceedings we saw Atletico become more intent on winning the ball back and applying pressure further up the field. Unfortunately for the Spanish side, Dortmund were extremely adept throughout this game at playing through tight areas and escaping pressure successfully.

In the example above we see Dortmund play from right back to left back connecting across the entire back four before the ball was then shifted forwards into the Atletico half of the field. Crucially we see six Atletico players get completely taken out of the game as Dortmund play around them and then past them.

When Atletico are at the top of their game their defensive structure is without parallel in football today, they swarm the opposition and make it very difficult for their opponents to play around large chunks of defenders as Dortmund have above.

In the end Dortmund were extremely comfortable in this match coming out 4-0 winners, a side coached by Diego Simeone conceding four goals in any one game is an extreme rarity, with the interplay in the final third from the Germans being key as they continuously found routes through or around the Atletico defensive structure.

Throughout the match, Atletico were compact defensively but they found themselves ceding too much space in the wide areas of the field where Dortmund were able to create overload opportunities. As you can see Atletico are set up in two banks of four but the eight defensive players are only being occupied by two Dortmund players. There are three Dortmund players in space to the left of the defensive block and the man in possession has time and space to turn the ball out to that side.

Time and time again we saw the German side find ways to create chances from these situations.

Dortmund were also able to connect easily in central areas as the three central midfielders for the German side overloaded the two central midfielders for Atletico again and again. Here we see a quick combination in midfield as the ball is progressed forward before the advanced midfielder is able to move into space before finding the left back advancing forward off of the blind side of his marker.

When Achraf Hakimi joined Borussia Dortmund this past summer on loan from Real Madrid the general consensus was that he was signed to give depth to the right back area. In this match, we saw Hakimi line up in the left back slot from where he would give an assured performance.

The time that Pep Guardiola spent in German football saw the way that fullbacks could be used change. At Bayern Munich, Guardiola used Phillip Lahm and David Alaba as fullbacks who would be able to move in an inverted fashion into the half spaces and central areas of the field, these movements were similar to those that we have seen traditionally from more advanced players who play as inside forwards as opposed to wingers.

In this match Hakimi was extremely effective in the attacking phase at picking the ball up and then running diagonally into the half spaces where he was difficult to pick up and engage for the Atletico defenders.

Here we see Hakimi moving diagonally in to the final third of the fie, as he does so he creates a 1v1 situation against the defensive player, there is another 1v1 situation in the wide area and yet another in the central area. These kinds of intelligently angled runs are effective against sides that play in straight defensive lines with no staggered players positioned between the defensive and midfield lines.

Again here we see the effectiveness of the diagonal forward runs from Hakimi. The defensive player is intent on covering the forward pass to the Dortmund player in the wide area and his body position is turned to the ball and the wide player. Hakimi makes a sharp vertical run past this defensive player and is able to move onto the pass in space behind the defensive line in to the final third.

It is no exaggeration to say that 4-0 is the least that Dortmund deserved in this match. The attacking structure and mechanisms they displayed throughout were top class and Atletico found themselves constantly overloaded as the German side flowed forward.

It is still early in the season but the German side are looking good to qualify for the knockout stages of the Champions League and they sit top of the German Bundesliga. Perhaps in Lucien Favre they have finally found a coach that is capable to rebuilding the club to previous levels.

Favre Faltering: Dortmund are risking their UCL campaign once more

How did Borussia Dortmund get off to such a good start...

Players Dortmund Should Be Looking To Sign In The Coming Transfer...

The Decline: Time up for Mario Götze?