This analysis originally featured on totalfootballanalysis.com

Before the start of the Bundesliga season 2018/2019, Borussia Dortmund and TSG 1899 Hoffenheim were labelled as possible hunters of the record champion Bayern Munich. The fourth match-day of the league contained the battle between the two Champions League starters. This match promised to be an interesting tactical battle between the head coaches Favre and Nagelsmann. The match unveiled some tactical problems of Dortmund’s possession phase as well as a counter-attacking concept of Hoffenheim. In the following, we will take a closer look at these tactical key aspects.

Nagelsmann chose his typical 5-3-2 / 3-1-4-2 system. Due to some injuries, Nagelsmann lined up Vogt, Bicakcic and Posch in his back-three for the starting line-up. Grillitsch already convinced in the first matches as the holding midfielder. Zuber and Bittencourt supported the Austrian in central midfield. Newly German international Nico Schulz and Brenet played on the wing-back positions. Up front, Kramaric and Joelinton were lined up as the two strikers. 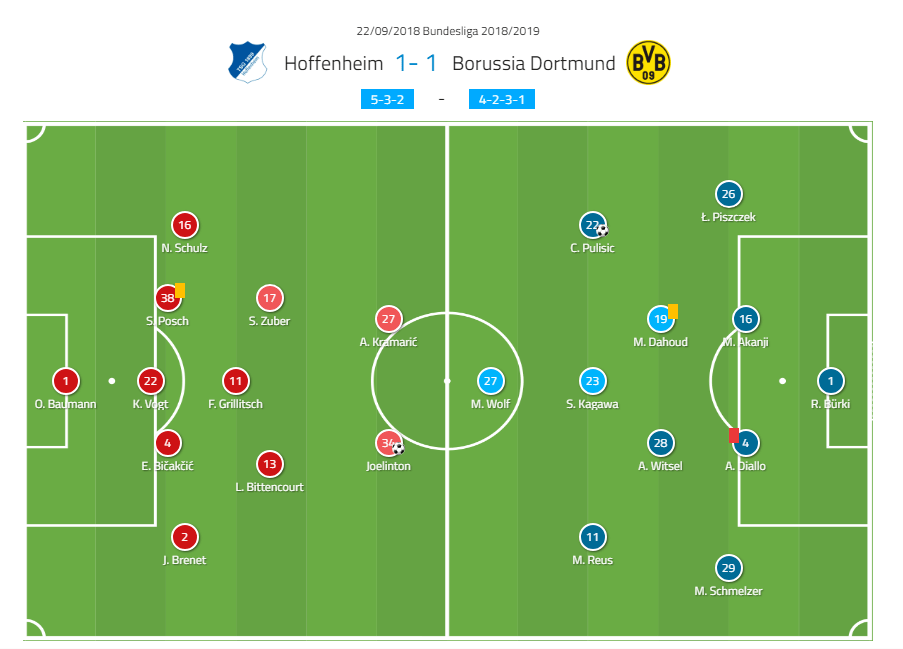 Favre changed the formation to a 4-2-3-1 compared to the 4-1-4-1 that he used in the first matches of the season. With the pairing of Diallo and Akanji, head coach Favre chose a young central defence. The back-four was completed by Piszczek and Schmelzer. Witsel and Dahoud were lined up in central defensive midfield. The creative Kagawa played on the playmaker position. With Reus and Pulisic, Favre lined up very fluid wingers. As BVB has not found the perfect fit for the striker position yet, Wolf was surprisingly playing on this position.

Being out of possession, Hoffenheim fell into a low-block in their own half. Wing-backs Schulz and Brenet completed the back five. Central-midfielders Bittencourt and Zuber dropped to support Grillitsch. That way TSG defended in a 5-3-2 formation. Hoffenheim attempted to cut off the passing options in wide areas. After leading the ball to either of Dortmund’s full-backs, Zuber or Bittencourt moved towards the ball to avoid a diagonal ball played into the centre. The wing-backs mostly stayed with the wingers of BVB to prevent Pulisic and Reus from receiving the ball and turning in dangerous zones. Hoffenheim waited for BVB to commit mistakes when playing into depth.

Dortmund’s attacking phase reminded a bit of the former problems under Stöger. The positioning of the players is not ideal to progress up into the last third. In several situations, BVB players positioned themselves in a way that reduced the passing options for the ball-carrier. Often two players were positioned on the same lane which allowed Hoffenheim’s midfielders to mark two players at once. It seems that BVB players get too much freedom under manager Favre leading to an unorganised structure in possession.

Moreover, Dortmund miss width in their spacing. When the ball is on one side of the pitch, all players except the full-back on the ball far side shift towards the ball. That reduces the space and disables them to quickly switch play. Every situation Dortmund switched sides, it took several passes and thereby way too long to use the open space. During the time of switching play, TSG had already shifted to the side to minimize space. As the wing-backs of 1899 stayed with Dortmund’s wingers, the narrow positioning of Pulisic and Reus further decreased space in the centre. The few times, winger Pulisic had some free space, the American was able to exploit this with his dribbling abilities and created a dangerous goal scoring opportunity. However, these situations were rare exceptions because BVB never consciously created them.

The wrong moment to attack

Furthermore, Borussia miss to occupy space between the lines before starting the attack. The defenders and midfielders often play passes into deeper areas before their team-mates arrive at their position. Because of that, BVB are not able to win second balls to get a new opportunity to attack with an even better angle for a threatening pass. It is not a coincidence that Hoffenheim’s leading goal resulted from a situation where Witsel introduced the attack with a pass into the centre while the wingers were not even on their positions. This facilitated Hoffenheim to reduce the space in the centre to win the ball.

Although there is a lot of movement and rotations in the possession phases under Favre, BVB struggle to create chances from open play. The following stats show that Hoffenheim was way more effective from open play than Borussia. Just one of Dortmund’s positional attacks resulted in a shot, which is only 3% of their attacks.

One of the only attacks where Borussia showed a good structure lead to the equalizer of the game. Three Dortmund players moved between the lines and were ready to run into the penalty box after a through pass in the half space.

Mixture of Positional Play and Counter-attacks

Nagelsmann is well known for being very adjustable concerning his tactical plans for games. This match, Nagelsmann wanted his side to make use of Dortmund’s weakness to defend counter-attacks. Therefore TSG accepted to have less possession although being capable of dominating opponents in possession. This is the reason why Hoffenheim dropped into their own half when defending as described above. As a result, Dortmund needed to move further up the pitch opening up spaces behind their defenders.

Whenever BVB was able to reorganise quickly enough after losing the ball, TSG switched into a positional approach. Nagelsmann wants his players to create width and depth. Therefore, the wing-backs stay outside and the strikers move up the pitch as far as possible (depending on the offside line). The central midfielders stay between opposition defence and midfield to allow players of the back-three or the single pivot Grillitsch to use the free space between opposition midfield and attack. Furthermore, the positioning behind the midfield allows to use the blind-side of the opponents to either receive the ball in a gap or to secretly drop into midfield.

When Hoffenheim struggled to play out from the back with short passes, they often used striker Joelinton as their target man for playing long balls. Every TSG player quickly shifted towards the ball in these occasions. This enabled 1899 to win second balls and to catch Dortmund in a bad shape. The clear structure and instructions Hoffenheim players have in possession lead to the very effective style of play that Nagelsmann deployed.

To be honest, it was a lucky draw for Dortmund since Hoffenheim controlled the match and had better goal scoring opportunities. The xG values prove that. Nevertheless, BVB effectively used their opportunity to even the score with only ten men after a red card for Diallo.

Hoffenheim seems to be well prepared for their first ever season competing in Bundesliga, German Cup and Champions League. Dortmund’s problem to create chances in possession phases remains unsolved and the search for a striker threatening the opposition goal continues.

The Decline: Time up for Mario Götze?

The greatest forwards ever to play for Dortmund: Do you agree?