This article was originally published on our dedicated football analysis site, totalfootball.com.

Borussia Dortmund are having a vintage season. They finished the first half confidently at the top of the league after beating closest challengers Borussia Monchengladbach 2-1 before the break. Manager Lucien Favre brought in a number of players that have helped to transform the team. One of them is young Moroccan full-back Achraf Hakimi who is in Germany as part of a two-year loan deal.

Although it seems like he emerged from nowhere, the tenacious 20-year-old is actually the first Moroccan to win a Champions League medal. He has experience of playing at a high level, despite his youth, having joined Real Madrid aged seven before making his way through the club’s academy La Fábricawith potential abound.

Only one season in the Castilla side saw him promoted to the full squad where he was quick to make an impact. Having been bred as part of their system, he immediately fit in to the expectations of the big stage. Playing as an understudy to Dani Carvajal under Zidane at right-back, he has played mostly on the left since moving to Germany.

Adaptable and versatile, he has already become a key part in Favre’s dynamic tactical system. Beyond the domestic stage, his performances for his country contributed to his recent award for 2018’s African Youth Player of the Year.

Hakimi is one of the few players that seem to play with positional freedom in Favre’s side, being less fixed and linear than Łukasz Piszczek on the opposite side. His statistics show him as more of an attacking entity and even within that context, he plays with great fluidity. Whilst playing predominantly close to the wing, his inside runs often cause chaos for the opposition.

In Favre’s system, the key is quick transition and sharp shifts in tempo, but also a sense of spontaneity and unpredictability. Although working within strict strategic confines, his Dortmund side often deviates from repetitive movements thanks to the dynamism of players like Hakimi.

Defensively, Hakimi isn’t as established as Piszczek, but his element of unpredictability is paramount in their efficacy. Aggressive and with unrelenting stamina, he is the chaotic element in Favre’s set-up, contrasting with the more predictable movements of Marco Reus, Axel Witsel and the centre-backs.

It is these ideas, his varied attacking outlets and his physical brand of defending, that I’ll explore in this tactical analysis.

The role of the full-back has evolved into a multifaceted position that values a player’s ability to move forward as well as to defend. Hakimi currently has six assists in 15 games for Dortmund, both in the Bundesliga and Champions League.

In a virtuoso performance against Atlético Madrid where the Germans left 4-0 winners, three were assisted by Hakimi. In this match, he exemplified the qualities that define the contemporary full-back. In this section, I’ll focus on his vertical attacking movement.

Hakimi is noted as a player always looking for the ball. That means not only from his teammates but his willingness to track down opposition to win possession.

In a recent Bundesliga match against Hertha Berlin, he displayed the importance of physicality and strength in the full-back role. Although he doesn’t look as powerful as some of his contemporaries, his aggressive playing style and virtually unmatched stamina make him a formidable opponent moving forward.

Initially playing as a winger in his youth, his propensity to run at opposition and confidence in communicating and overlapping show a great deal of promise and potential in an attacking capacity. His attacking statistics are more similar to Dortmund’s wingers than their other full-back options. Per Bundesliga game, Hakimi takes 1.1 shots, 1.6 dribbles and makes 0.6 key pass.

He has more in common with Raphael Guerreiro on the left (1.1 shots, 0.9 dribbles and 1.5 key passes) than with right full-back Piszczek (0.5 shots per game, 0.3 dribbles and 0.7 key passes). Even when partnering with Jacob Bruun Larsen, he records more of an attacking impact than his more advanced teammate.

Dortmund, under the preferred 4-2-3-1 of Favre, don’t often stretch the field, vertically or horizontally. Hakimi offers this dynamic, often playing right up to the goal-line. The side prefer instead to work through the half-space, rarely relying on crossing. With Hakimi though, as with Jadon Sancho occasionally on the right, they utilise the full dimensions of the pitch and play sharp and direct low crosses.

In Dortmund’s 2-1 over Werder Bremen in December, the left-sided pairing of Hakimi and Raphaël Guerreiro interacted spectacularly on the left side. Their intelligent and complex interplay made marking that wing particularly difficult.

Predominantly threatening on the wing, Hakimi uses his incredible technique with the ball at his feet to cause chaos on the inside as well. Acting as a hybrid between marauding full-back and inverted full-back, his unpredictable runs are difficult to predict and defend against.

Favre opts to launch attacks through the half-space, working the ball into the box rather than whipping in crosses. As part of his defensive duties of recovery, Hakimi’s often a trigger to launch counter-attacks. In these instances, his unpredictability is a cause for concern for opposition managers. Always looking for the ball, he’s as happy getting it to his feet as he is chasing after it.

Fast transitional play is a crucial element in Dortmund’s formidable attack. The side have scored 44 goals in 18 matches in the league, and the fulcrum is the high-tempo movement in the transitional phase.

Dortmund’s centre-backs give width, shielded by the midfield pivot of Axel Witsel and Thomas Delaney, allowing the full-backs to play higher up. In this position Hakimi, confident and displaying strong resistance to the press, can confidently play higher up and move more centrally with the winger or defensive two as cover.

Perfect physical attributes for the role

His strength, despite his modest physique, is impressive and his pace is often unmatched. This is beneficial in the attack, but likewise in defence. In one-on-one scenarios, Hakimi often shows his relative lack of experience when committing. To counter this, his speed offers an avenue of recovery whereby he gains a favourable position in front of the attacker, or by his side to muscle him off the ball.

Although his actual commitments can be weak, his positional awareness is strong. Dortmund are particularly susceptible to counter-attacks and long-balls as they can be thin in the middle if caught. In these cricumstances, Hakimi’s resilience under pressure has made him a valuable asset.

His ability to communicate is also noteworthy. As a full-back that likes to make runs, strong communication to organise cover is essential. This ties in with an important aspect of the modern full-back that oscillates between attack and defence: reading the game. It’s especially important to know the movements of your immediate players.

Thanks to the intelligence of the pivot shielding the centre-backs, Dortmund have rarely been exposed using this tactic. That was until recently against an inspired Fortuna Düsseldorf, who ruthlessly exploited space with long balls and a fast winger used as a centre-forward.

Incidentally, Hakimi didn’t play in this match and the left side combination of Schmelzer and Bruun Larsen struggled to make an impact. This tactical shortcoming comes with the territory, but Hakimi’s presence, through both his strength and pace, is Favre’s best option to counteract it. 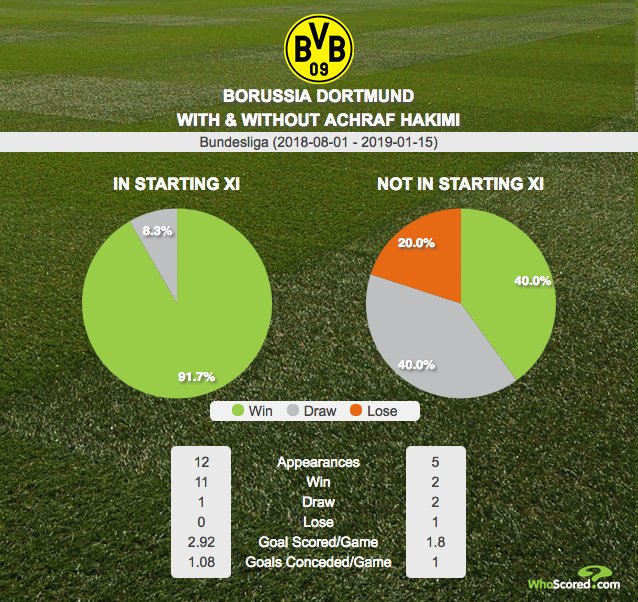 He’s still young, but he’s playing at a high level with a high set of expectations. He seems to be favoured by Favre and fits into his system perfectly. In big games against intelligent attacking sides, however, his defensive commitments, especially in one-on-ones, must improve. This is especially true against more traditional wingers that like to hug the line and whip in crosses.

With Hakimi’s unpredictability and versatility, between functioning in defence and providing attack both on the wing and on the inside, Favre seems to be incorporating him as a key aspect of his philosophy. Bearing in mind his age, he’s already one of the world’s most promising full-backs, and he fits his current system like a glove. If he can iron out the defensive creases, his trajectory will continue at the scintillating pace it has been on.

If you love tactical analysis, then you’ll love the digital magazines from totalfootballanalysis.com– a guaranteed 100+ pages of pure tactical analysis covering topics from the Premier League, Serie A, La Liga, Bundesliga and many, many more. Buy your copy of the January issue for just ₤4.99 here, or even better sign up for a ₤50 annual membership (12 monthly issues plus the annual review) right here.

Five New Dortmund Signings and How They Can Help the Team

How High Fidelity Answers the Question of When Zidane Should Retire